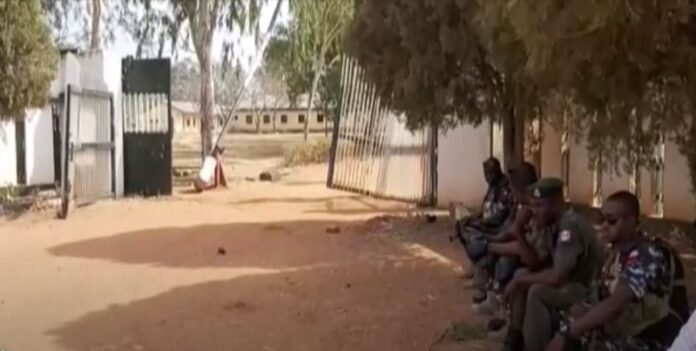 Three teachers were kidnapped in northern Nigeria on Monday in an attack on a primary school in Kaduna state, authorities said in a new statement.

An earlier report said an unknown number of children had also been abducted, but it was still being investigated before the exact numbers could be released.

The new statement said no students were kidnapped.

Armed men invaded the school in the town of Rema, in the district of Birnin Gwari, at around 8:50 am (07:50 GMT), and “kidnapped three teachers”, according to the Kaduna government.

Apart from the three teachers, “no member of staff or student is missing,” the statement added.

As the armed men arrived at the school on motorbikes, the students immediately fled, the latest statement said.

After the attack, two students were missing reportedly missing, but they were then found.

It is the sixth attack or attempted school attack in less than three months in northwest and central Nigeria, where criminal groups, called “bandits”, attack villages, rob cattle and kidnap for ransom.

Authorities in Kaduna said in a statement there was a “kidnapping of students and teachers in a primary school located in the town of Rema, in the district of Birnin Gwari”.

The authorities “are in the process of collecting details on the number of students and teachers abducted” and will communicate them shortly, the local Minister of Home Affairs, Samuel Aruwan, said in the statement.

The new attack comes a day after Nigerian security forces thwarted an attempt to kidnap hundreds of schoolchildren in the same state of Kaduna.

Last Thursday, armed men also stormed a school in Kaduna on the outskirts of Mando.

The army managed to rescue nearly 180 students but 39 are still being held hostage. A military operation is still underway to rescue them, according to the local authorities.

Several states in northern and central Nigeria have closed their schools for security reasons, raising fears of worsening dropouts, particularly among girls, in these poor and rural regions which already have the highest rate in Nigeria of children not attending school.