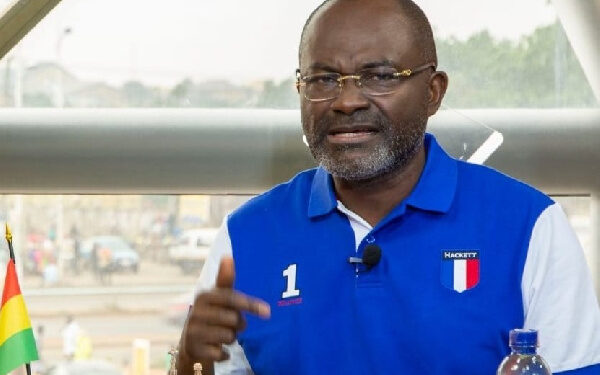 Maverick politician and New Patriotic Party(NPP) MP for Assin Central, Ken Agyapong says he cannot afford to remain quiet over actions he considers will send the party to opposition as he’ll be the first casulaty when the party exits power.

He condemns the intense internal jostling by supporters of Trade Minister, Alan Kyerematen and Vice-President Bawumia over who succeeds President Akufo-Addo two months into the President’s second term, adding that if this campaign is not stopped it will send the party out of power.

“NPP people should listen to me well, if we go to opposition I’m the first person who will suffer huge casualties, therefore I’m not going to sit down for anybody to make a mistake to send the party to opposition. Don’t think that I’ll remain silent, I will definitely talk after all the ministers are appointed and approved by Parliament. If the NPP like, let them repeat the same mistakes and see if they can control me. No, no, no, they can’t, if they do. So their fixation on power at this early stage of Akufo Addo’s second term must be shelved. It is too early to start jostling for who’ll succeed President Akufo Addo when he’s even yet to form his government for the second term. We should learn from our past mistakes and stop disintegrating the party with our ambitions, it will not help the party,” Hon. Ken Agyapong said in an interview on Oman FM monitored by Kasapafmonline.com.

Meanwhile, The General Secretary of the NPP, John Boadu has said the party will not permit the testing of waters now by party bigwigs who have ambitions of leading the party as Flagbgearer into the 2024 Presidential election.

Supporters of Alan Kwadwo Kyeremanteng, a former Minister of Trade and Industry who lost to Akufo Addo for the flagbearership slot in 2007 and 2014, and that of the current Vice President Dr. Mahamudu Bawumia have started an open campaign on social media over who leads the party in 2024 elections.