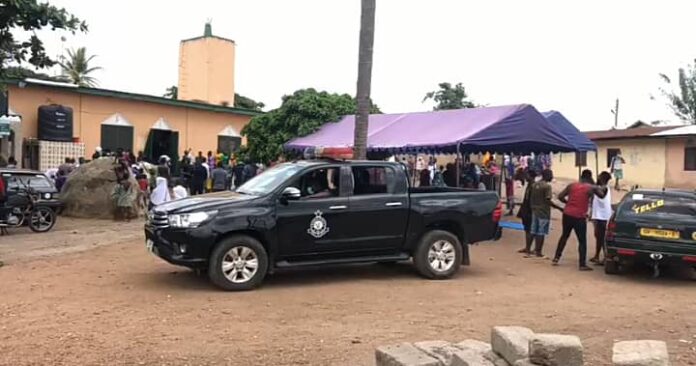 Residents in and around Sabo Zango in the Volta regional capital of Ho are living in fear following a renewed clash between supporters of two factions at the Central Mosque on Friday.

The Central Mosque on Friday turned chaotic as supporters of Alhaji Muniru Ali disrupted Jummah prayers being led by Alhaji Alfa Anas Hamidu, both of whom have been
fighting over who succeeds Umoro Danjimah Hamzah, as the new Volta regional Chief Imam.

The mosque for several months has been under keys and lock, following an earlier directive from the Ho Municipal Security Council as the two sides fight over who leads prayers (salat) at the mosque.

But to the chagrin and dismay of supporters of Alhaji Muniru Ali, the worship centre was opened on Friday with Alhaji Alfa Anas leading prayers.

The disgruntled supporters mobbed the mosque, armed with knives and pepper spray allegedly threatened to stab their opponents.

One person who was sprayed with an unknown chemical fell unconscious and was rushed to the hospital for medical attention.

It took the arrival of the police for calm to be restored at the mosque. 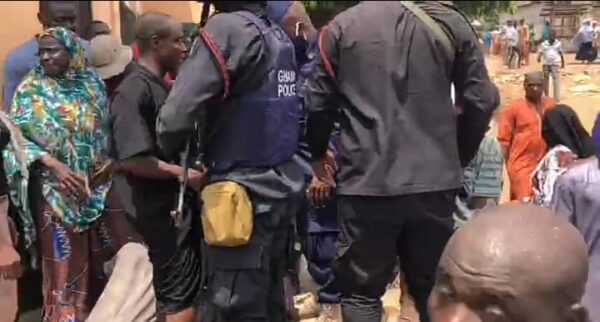 According to the Ho Municipal Police Commander, Alexander Adade Yeboah, he only acted on a directive by the Municipal Security Council “to open the mosque to the general public.”

Friday’s clash however, meant that the mosque would remain closed until further notice.

Both Alhaji Muniru Ali, a nephew to the late Umoro Danjimah Hamzah and Alhaji Alfa Anas Hamidu, a deputy to the former Chief Imam were installed in separate ceremonies -a situation that has created a serious power struggle in the once peaceful Zongo settlement.

Speaking to the media, a supporter of Alhaji Alfa Anas, Suhailu Mohammed Kidza, said “They tried to beat him [Alhaji Alfa] but we protected him and sent him home.”

While affirming the legitimacy of Alhaji Alfa Anas, Suhailu Mohammed Kidza said, “BNI came in, National Security came in, Peace Council came in, chiefs came in and they know automatically Anas is the leader.”

However, Adamu Hamani, a Zabarma Chief and supporter of Alhaji Muniru told the media that they were enraged by the decision to re-open the mosque without their knowledge.

He indicated that Volta Regional Peace Council is in an advanced mediation between the two factions in view of finding a lasting solution to the impasse.

He further called on authorities in the region to use their influence in ensuring that peace returns to the Zongo.

Reaction from other residents

Meanwhile, some residents in and around the Zongo have expressed fear over the current happenings.

One resident, Salamatu Hamza said, “We have always lived in peace but the way things are going, one cannot tell what will happen tomorrow. We are now leaving in fear, may the Almighty Allah intervene,” she said in the local Hausa language.

John Amenya, an Ewe resident also said, “As you can see, the Zongo boys have taken sides and are ready to fight this issue even to death. I cannot tell who is right or wrong but I fear this thing may escalate if care is not taken.”

Another resident, Munkaila Iddi said, “Islam is for peace and so this is uncalled for and so I pray that a lasting solution is found quickly to this matter. If we kill each other today over who leads prayers, who would the Imam lead after all,” he questioned.

What is however obvious is that, many of the young folks may be taking advantage of the current situation to settle scores with old foes.