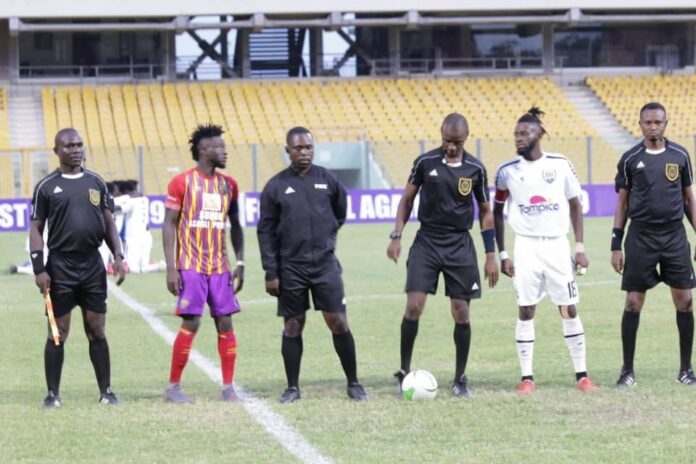 Hearts of Oak extended their dominance over Inter Allies with a 1-0 win in Sunday’s late kick off at the Accra Sports Stadium.

Defender Paul Abagna’s 26th minute own goal condemned the ‘Eleven Is To Wise’ to another crushing defeat.

Hearts of Oak made a promising start after Emmanuel Nettey- facing his former club-delivered a powerful shot from distance was parried back into play by goalkeeper Rashid Seidu but it was eventually cleared out for a corner throw-in.

After ten minutes Allies threatened with a promising move after  Samuel Armah brought a lobbed  free-kick down with his chest inside the box, spun and shot at goal but he dragged his effort wide.

After 19 minutes, there was a huge scare for hearts after Mohammed Alhassan attempted clearance of a cross from the left went straight into the side net.

Striker Richard Arthur took an audacious attempt to find the back of the net in the 22nd when he unleashed a thunderbolt from distance but it was a skied effort.

Two minutes later Abdul Manaf Umar replied with a similar technique but he did not get a full blast of the ball.

Centre back Nuru Sulley made a rare move upfront for a free-kick and could have found the back of the net but his effort on a rebound inside the box went wide.

Barnieh again came close grabbing a personal second and doubling the lead for Samuel Boadu’s boys but his shot at goal was deflected by Emmanuel Agyemang Badu for a corner kick.

Allies were unrelenting and continued to push for the equalizer though at times it exposed them at the back.

Fard Ibrahim sent in a long cross from the left straight to the head of striker Arthur but it went off target.

The defeat- their 12th of the campaign-is a huge blow for the Allies in their quest to survive relegation.