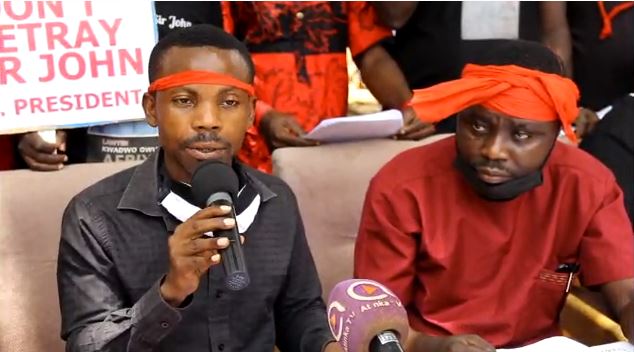 Aggrieved residents of Sakora-Wonoo, the hometown of the late stalwart of the ruling New Patriotic Party(NPP) Kwadwo Owusu Afriyie aka Sir John have threatened to prevent government officials who’ll be attending the final funeral rites.

According to them, the government has abandoned all projects initiated by the late Kwadwo Owusu Afriyie.

The main bridge which links Sakora-Wonoo to communities like Ahodwo, Krobo Asonomaso and other communities can only be likened to a death trap.

Work on the 6.5km road from Asonomaso to Sakora-Wonoo, which was started in 2019 was abandoned after the one-week observation of the passing of the former CEO of the Forestry Commission.

The aggrieved residents cited Asonomaso junction to Sakora-Wonoo road project which they say the contractor has abandoned site.

Promises like the construction of a school, clinic, water supply are yet to be fulfilled.

Cladded in red and black and holding banners with various inscriptions, the protesters calling themselves concerned residents of Sakora-Wonoo asked government to complete the road project before May 27 of this year, a fixed date to bid the late Sir John a farewell.

The Secretary of Sakora-Wonoo concern youth association, Emmanuel Wiafe said they saw contractors working on some projects including roads, but stopped immediately after the one-week observation of Sir John’s death.

The Queen mother of the area Nana Ama Nyarko, cautioned the NPP government not to step foot in the community until issues are addressed.