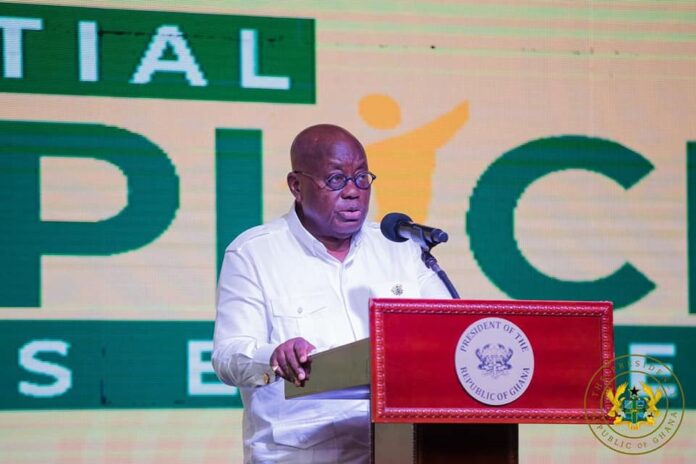 President Akufo-Addo has assured the film industry players that they will soon be informed on the road map to the reopening of cinemas in the country.

The cinemas in the country have remained closed from March last year due to the outbreak of COVID-19 in Ghana.

However, the President noted that the task force managing the COVID-19 pandemic in the country is constantly reviewing the measure and will update stakeholders on the much-anticipated reopening.

“The opening of cinemas is under constant review by the COVID-19 task force and hopefully, we will hear from the task force very soon” President Akufo-Addo said when he addressed the first in the series of the Presidential film pitch at the Mövenpick Ambassador Hotel under the auspices of the Ministry of Tourism and Culture and the National Film Authority (NFA), today the 28th of April 2021.

The event was under the theme:”Strengthening the Ghana film Ecosystem”

The Presidential Film Pitch Series is a film activation program in Ghana aimed at creating the platform for Ghanaian filmmakers with projects within the Ghanaian film ecosystem to engage investors, broadcasters, distributors, sponsors and platforms around the world for potential collaborations, sponsorships, investments, sales and advertising opportunities.

100 Projects in the form of documentaries, feature films, short films, series, games, film infrastructure were received by the National Film Authority (NFA) from Ghanaian film entrepreneurs, out of which 25 projects have been shortlisted. The goal is for each shortlisted project to close deals that will bring it to fruition.

President Akufo-Addo said countries such as the United States of America (USA) and the Federal Republic of Nigeria, have built profitable film industries and Ghana is capable of doing same.

“I am aware that the Ghanaian film industry has many fine, talented players along the value chain and government will continue to initiate policies and programs to help make the Ghanaian film sector competitive and viable. The National Film Authority will lead the charge in introducing business development modules into film making, production and distribution in order to help create a vibrant market for local film production” President Akufo-Addo stated.

“Take for instance the American film industry, better known as Hollywood, which supports some twenty-two million jobs and a staggering wage bill of one hundred and thirty-seven billion united states dollars ($137,000,000,000.00). In neighboring Nigeria, Nollywood is said to contribute some six hundred million United States dollars ($600,000,000.00) to the country gross domestic product and create some on million jobs” the President added.

Stressing further, President Akufo-Addo indicated that he believes that it is not beyond Ghana “to produce such statistics and the availability of the right skills set is critical to this end”.

The President noted that in order to produce the right skills set, “Government is retooling the National Film and Television Institute (NAFTI) to enable it provide the needed training for players in the industry” in the country’s “quest to make Ghana attractive to international film productions” as well as to make her a “hub for film production in West Africa”.

“Forty-five million euros (€45,000,000.00) has been approved for NAFTI to reform it into a world-class training facility,” President Akufo-Addo said.

In his address, the President revealed that he has given his assent to the Creative Arts Industry Act which was passed by the 7th Parliament of the Republic during his first term in office. He indicated that the Act will help create an “enabling environment for the Ghanaian film sector and the creative arts sector in general, to contribute effectively to the nation’s growth”.

Domelevo was not forced out of office – Akufo-Addo insists

Galamsey fight: I won’t punish any appointee over hearsay – Akufo-Addo