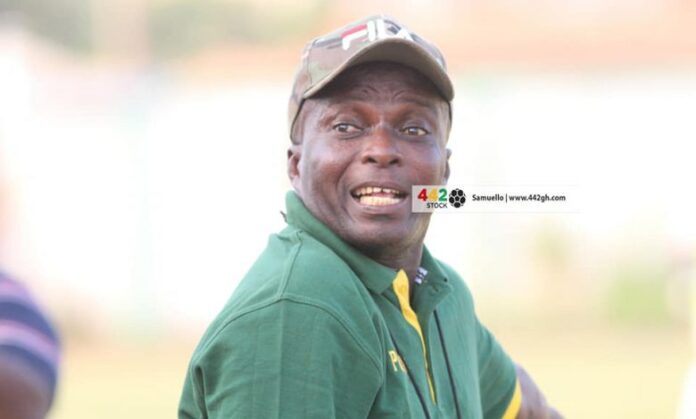 Ebusua Dwarfs coach Ernest Thompson Quartey is responding to treatment after being mercilessly beaten by fans of Berekum Chelsea in their 2-1 defeat on Sunday in the Ghana Premier League for allegedly carrying black magic.

Thompson who had his shirt torn, left the stadium with his left arm bandaged.

The PRO of the club, Abeiku Okyere, told Adam Adjei host of Dwidwam sports night on Kasapa 102.5fm, that the coach is getting better.

“The coach has responded well to treatment even though he had to sit on the ground to execute his responsibilities during training today because his injured arm is now healing and he needed to relax”.

He was further quizzed about how Ebusua Dwarfs have responded to the beating of their coach and the plans they have in place to bring the culprits to book.

“We have officially lodged a complaint to the Football Association and a meeting is currently ongoing and we are hoping to get something fruitful out of it.”

“We believe the Ghana Football Association and we are confident that the necessary investigations will be made and those found guilty will be prosecuted.”

“We tried lodging a complaint at the Sunyani District Police station close to the Municipal Hospital but we were told to go to Berekum or go to the head office since the incident happened there.”

This incident follows right after the FA president Kurt E.S Okraku held a stakeholders meeting between the club administrators and the police to discuss ways to curb hooliganism in the northern part of the country.