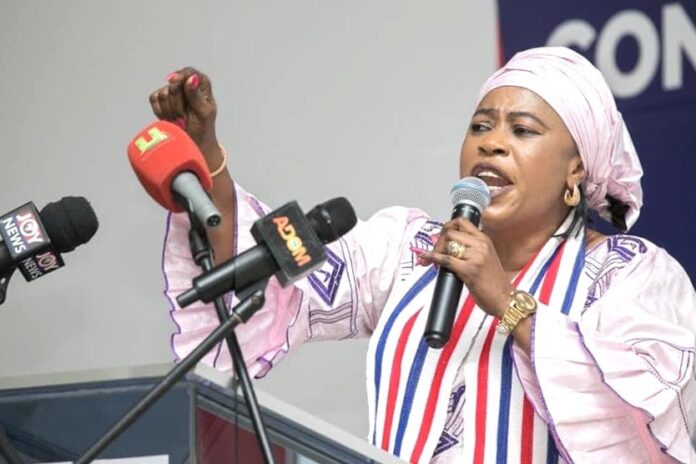 The National Women’s Organizer of the New Patriotic Party (NPP) Kate Gyamfua has accused the Minister of Roads and Highways Kwasi Amoako Atta of constructing and tarring roads in his Constituency leaving other deplorable roads in other parts of the country.

According to Kate Gyamfua, the sector Minister should not only be fixated on roads in his area.

“Tell Amoako Atta that he was not made Roads and Highways Minister because of roads in his Constituency. Look at the number of world-class roads Amoako Attah is constructing in his hometown – Kwabeng and other communities. What have we done wrong in Akwatia and its environs to deserve these bad roads? If you are made road Minister, you must also look at other places to construct the roads,” She said on Akyem Oda-based Ahenkan FM.

She added ” I decided to use the Kwabeng road to Akwatia on my return from Kumasi. I was amazed by the road constructed from Anyinam junction to Kwabeng. They were even doing another asphalt overlay on it. I picked the phone to tell Amoako Atta that God will punish him if he doesn’t construct our roads in Denkyembuor”.

The statement by the National Women’s Organizer comes few days after the Chief of Akwamu Adumasa, Nana Ansah Kwao IV accused government of constructing roads only at the Party’s strongholds.

The Chief of Akwamu Adumasa in Asuogyaman District in the Eastern Region Nana Ansah Kwao IV expressed disappointment over government’s failure to rehabilitate and tar deplorable roads in the district.

The Chief who is also a revered media personality said roads in Asuogyaman district have been neglected by successive governments and have now deteriorated affecting agriculture and tourism in the area.

He observed that the construction of roads has become political to the point that the government is constructing roads in areas where they will get more votes.

Government declared 2020 as the “year of roads”, a vision aimed at improving road infrastructure in the country.

The Minister of Roads and Highways Kwasi Amoako Atta said in Koforidua on April 11, 2021, that, the government invested over Ghc10 billion in the last four years.

However, many communities continue to agitate over poor roads across the country.

Nana Ansah Kwao IV wants government to consider adopting other low-cost engineering technologies in road construction to facilitate the development of road infrastructure in the country and reduce cost.

“It is a shame that, as a country in the year 2021, we can’t explore cheaper ways of constructing roads. People have come out with cheaper sealants for road construction at a low cost. All that we are appealing to our leaders in the country is that they should explore these cheaper technologies in road construction. “Some are 600% cheaper than what we are doing now. Some of these sealants can be applied on graded roads and after two hours it is ready for use and it can last as long as any other road. So, the question we have to ask ourselves is why are we spending so much on this only one way of road construction which has huge economic implications. Look at our roads in Asuogyaman, it is unfortunate” said Nana Ansah Kwao IV.