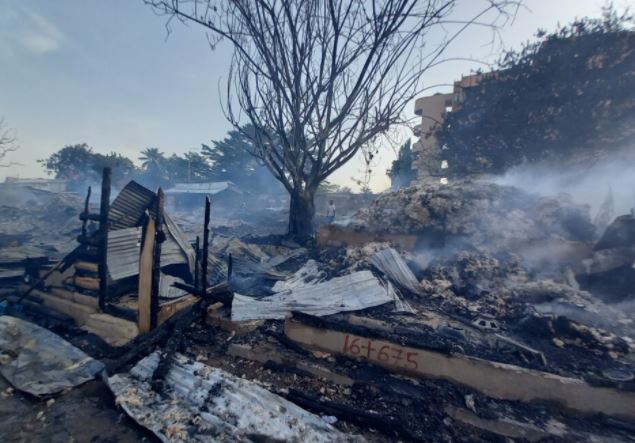 An 18-year-old boy driver’s mate has been burnt to death after fire gutted portions of the Asafo BB slum in Kumasi, in the Ashanti Region, on Sunday, May 2.

The inferno is reported to have been started by a couple who were cooking with a coal pot in one of the wooden shacks.

The charred body of the victim known as Nana Yaw was found after police and fire officers rushed to the scene to fight the inferno.

Fire Service personnel say they received a distress call around 14:43 alerting them about an outbreak of fire behind COCOBOD an area that is known for pillow production following which they rushed to the scene.

It is believed that the cotton used in the process ignited the flame.

It took the Fire officers a long time to douse the fire which spread fast and consumed the makeshift structures.

The residents who are mainly head porters and/or have menial jobs claim the fire has destroyed every property they own including huge sums of money.

Most of them have been rendered homeless.