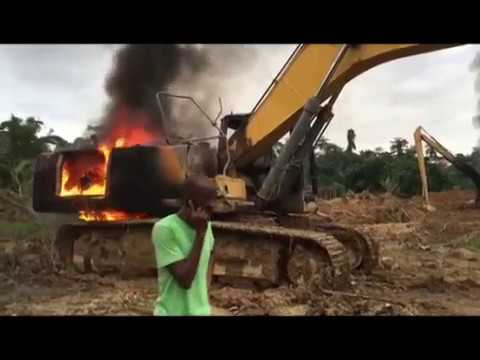 The Small Scale Miners Association in Ghana has asked the government and the Minister of Lands and Natural Resources to urgently address the issues about the burning of mining equipment and excavators at the mining sites by Military Personnel deployed by the government.

Addressing a Press Conference at one of the mining sites at Twifu Ntafrewaso in the Twifu Atti-Mokwa District of the Central Region, the aggrieved miners threatened they will hit the streets should government fail to address the actions by the military in seven days.

A spokesperson for the Small Scale Miners Abdul Alhassan Razak bemoaned what he says is the “total betrayal” of the Akufo-Addo government .

“We want to express our total displeasure about government’s u-turn on the issues raised at the recently held small-scale mining dialogue at the Accra International conference centre. Example is we never discussed anything about the militarization or using force to take people out on our legally acquired license sites.

“We have regretted voting for the NPP government in the 2016 general elections,” Razak said.

They however warned the Military Personnel deployed to the mining sites to stop intimidating their members, asking the government to allow them to do their work because they have the license and the documents to operate.

Some of the Small Scale Miners said “the only thing the government wants us to do is to go and steal and do robbery to earn a living, we are home doing nothing since our jobs were taken from us.”

Help us to secure loans – Miners to Gov’t