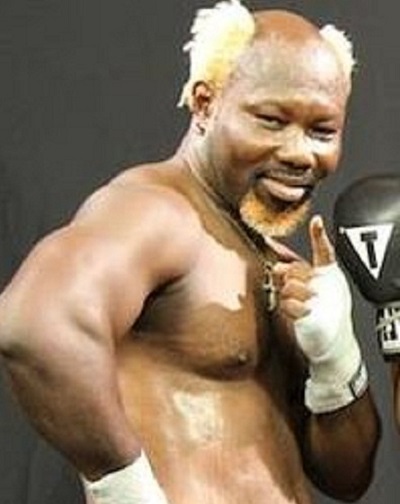 Ghanaian international boxer Michael Nii Ayitey popularly known as “Ayitey Powers” has awakened the long time grudge between himself and Braimah Kamoko aka “Bukom Banku” after saying on live radio that Bukom Banku will beg for food before he dies.

According to Powers, he said this on the account that his friend become enemy, Bukom Banku, has not been fair to him on several occasions and has even accused him of several things he hasn’t done.

“Bukom Banku doesn’t want any good thing for me. He has been saying a lot of negative things about me including calling me a thief, a fraudster and I think it is because he is jealous of me.”

“He was doing all these because of an argument we had about musicians King Jerry and Nii Funny and I advised him not to compare them because both of them have the talent and are pushing Ga music.”

Speaking on Accra-based radio station Kasapa FM 102.5 on Dwidwamu Sports Night, with Adam Adjei as host, he said out of pain that Bukom Banku will beg him before he dies because he went too far to disrespect his spiritual father T.B Joshua

“He even went far to the extent of speaking against my spiritual father Prophet T.B Joshua. I pray that God forgives him but that Bukom Banku he will beg for food before he will die. Everyone should mark that.”

The veteran boxer will be traveling to Australia to fight Australian-based boxer Danny Green on 30th July for the cruiserweight title.

Ayitey’s Australian opponent, Green, a cruiserweight boxer, has a record of 36 wins, 5 losses, and 28 knock-outs.

When asked about his feelings and strategies to fight such a gallant boxer, Ayitey however, debunked the idea of him being the underdog as he believed he would surely win.

“People are going to see a new Ayitey Powers and I am going to win the title at all cost.”