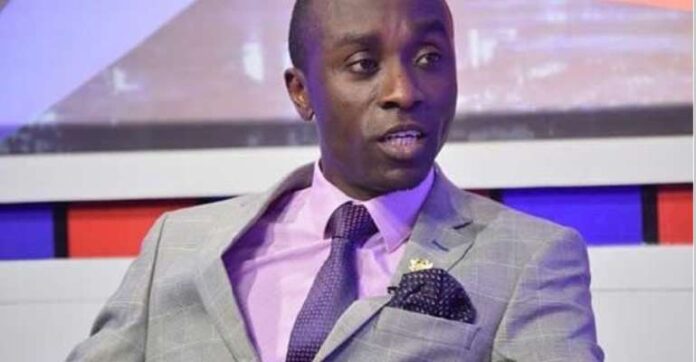 Head of Communication at Ghana National Gas Company, Ernest Owusu Bempah has launched a scathing attack on celebrities who have joined the #FixTheCountry campaign saying the noise being generated by them “is akin to drunken behaviour.”

The likes of Efia Odo, Yvonne Nelson, Serwah Amihere, Mr Drew, DJ Mensah, Wanlov the Kubolor, and many others have used the hashtag to call on government to attend to problems facing the country including the hike in fuel prices, poor education, health, infrastructure and ultimately the country’s economy, etc.

The online protest has been trending for the past 72 hours on micro-blogging platform Twitter.

Commenting on the development in a Facebook post, Ernest Kofi Bempah questioned what exactly have these celebrities fixed by themselves apart from their fake social media lifestyle and living on borrowed glory.

“Some of them can’t even fend for themselves let alone fix their boring life. They go about borrowing from people to support their fakery and some are in debts and can’t manage their lives and yet they are yelling at politicians?

“These guys need to fix their backward lifestyle and build something for themselves and get a life,” Owusu Bempah stated.

The temerity with which some so-called celebrities dabble in politics in this country amazes me at times. I just can’t get my head around it.

I have been holding myself back from getting into the gutter with these self-styled comedians who dabbles in social media politicking.

Why do these “entertainers” think anybody really gives a crap about what they think?

Of course this is the downside to social media; where below-average intelligence folks who can’t read and understand English want to teach the president how to govern.

The politics of attrition and patronage isn’t gonna help these social misfits and their backers.

President Akufo-Addo’s resilience, dynamism, organizational acumen and political astuteness is changing the game, and he is fixing both a pandemic and a country. Covid-19 has continue to devastate our beloved country like many other nations the world over. It is a process and the president is delivering on his mandate in the midst of the challenges facing us as a country.

The noise being generated by these so-called celebrities is akin to a drunken behaviour.

What exactly has these celebrities fixed by themselves apart from their fake social media lifestyle and living on borrowed glory?

Some of them can’t even fend for themselves let alone fix their boring life. They go about borrowing from people to support their fakery and some are in debts and can’t manage their lives and yet they are yelling at politicians?

These guys need to fix their backward lifestyle and build something for themselves and get a life.

Elsewhere in civilized countries, celebrities uses their leverage to embark on social responsibility projects to help their communities. We can talk of Madonna, Naomi Campbell, Iddris Elba who are using their status to support their communities and even here in Africa.

Let’s move away from these wreached comedians who call themselves celebrities and deal with the NDC politicians fueling this agitation.

Isn’t it even farcical to note that John Mahama who recklessly and irresponsibly ran a budget deficit of 12% GDP in 2012, and left an economy with a growth rate of 3.7%, the lowest ever in recent times is enabling these celebrities to yell about economic mismanagement?

It took John Mahama administration three good years to recover from a mere budget overrun/deficit, culminating in the decision to run to the IMF for policy credibility. Akufo-Addo on other hand is dealing with worldwide pandemic and its ravaging effects. Even at that, Akufo-Addo’s management of the economy has been superb so far. The economy which hitherto had high inflation, a high budget deficit, a depreciating cedi and depleting gross international reserves has been totally turned around for the better. The Macroeconomic indices attest to this feat with several indicators showing fantastic results never achieved in Ghana’s history.
According to the revised GDP estimate released by the Ghana Statistical Service, the economy is also growing steadily.

Prudent fiscal measures by the Akufo-Addo regime have resulted in a sustainable inflation rate for over 15 months. Ghana is being adjudged by rating agencies as a global best performer in access to credit and also the best place to do business in West Africa. Ghana investment promotion council (GIPC) figures released shows an increase in projects registered at theGIPC amounting to over $7billion in foreign direct investment.

Until we begin to collectively fix ourselves, nothing will ever change in this country. Indeed, before we can fix the country, we have to fix ourselves. Our stinking attitude and mindset has generally contributed to our problems as a country.

Everything stops with us as the citizenry including the so-called celebrities.

If the politician is to fix the country we the citizenry have a lot of issues that need fixing.

Let’s fix our attitudes. Let’s fix the country and let all of us get a firm grip on ourselves.