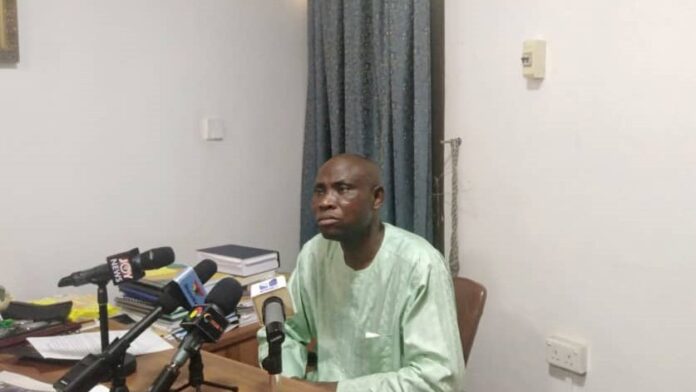 The Chief Executive Officer (CEO) of Bahmed Travel and Tours, Alhaji Ahmed Bandoh has denied allegations that he was involved in the operations of a fake money syndicate that was busted at the Kotoka International Airport.

Addressing a press conference in Accra, the businessman stated that he’s a law-abiding citizen who has built his reputation for many years and I will not allow anyone to destroy it.

Alhaji Bandoh stated that he only accompanied the lawyer of one Alhaji Mohammed to the National Security Headquarters.

He said both of them were prevented from seeing the officer in charge of the operations, who has been identified as Colonel Agyemamg.

“I disassociate myself from the fake currency saga and I am categorically stating that I have no knowledge of the alleged claims. I urge the general public to treat the publications with the contempt it deserves,” Alhaji Bandoh said.

The National Security has busted a-13-member gang involved in the printing and distribution of fake currency notes to unsuspecting victims, mostly foreign nationals.

A statement issued by the National Security Secretariat, copied to the Ghana News Agency, said the gang, led by one Yassei Alia, a 45-year-old Syrian resident in East Legon, and owner of Hardford Auto Service in Accra, together with Danjuma Zakaria alias Alhaji Mohammed, 49 and resident of Tema West, were rounded up in a warehouse within the premises of NacCharter Cargo and Freight Company, near KLM offices within the Kotoka International Airport, on Monday, April, 27 at around 5:30 pm.

Freshly printed $10,000 bundles of fake $100 notes concealed in two large metal trunks and a suitcase were retrieved from the warehouse.

The statement said the amount was estimated to be over $5 million United States dollars.

It said in their caution statements, Yassei and Mohammed, who drove to the warehouse in the former’s car, denied knowledge of the deal.

It noted that, however, when questioned separately, Yassei, who held a Syrian passport, a Republic of Guinea-Bissau diplomatic passport, and a Nigerian national driver’s licence issued in Ogun State, indicated that he had gone to the warehouse to have a discussion with one Kojo, an alleged cargo dealer and operator of the premises, regarding a V8 engine the latter was to import on his behalf, while Alhaji Mohammed stated that he had gone to solicit for financial help from Kojo to enable him to procure a vehicle from Holland.

The statement said further, while Yassei claimed Kojo sat in a meeting with them on the said day, Alhaji Mohammed indicated that Kojo was not at the premises at the time of their visit and that while waiting for him, they were arrested.

It said incidentally, two of the suspects interrogated separately corroborated Mohammed’s claim that Kojo was not seen at the premises on the said day.

“The group’s modus operandi, according to intelligence, suggest that they lure unsuspecting victims with claims that they have access to millions of US dollars in Libya,” the statement said.

“Victims are given genuine sums of US dollars to spend for free, as a proof of the genuineness of the deal.”

It noted that once convinced, victims were requested to deposit huge sums of USD dollars as freight charges to aid the shipment of the said dollars to the victims.

It said upon receipt of amount, the suspects package fake dollars stashed in between a few hundreds of genuine notes, for onward delivery to their victims.

It said shortly after the arrest, one Bandoh, Alhaji-Ahmed, alias Alhaji Bamed, owner of Bamed Travel and Tours, who claims to be a Presidential Staffer at the Castle, and a client of Yassie, drove to the National Security headquarters, verbally assaulted the leader of the operation, and vowed to free the suspects.

It said the aggressive conduct of Alhaji Bamed, suggested that he might be involved in the deal, particularly when investigations are ongoing.

It said officials of National Security had assured Ghanaians that the Government was determined to rid the country of fake currency syndicates and warned that persons involved in the illegality would be arrested and dealt with accordingly.

The National Security has therefore urged the public to report suspicious activities of persons to security agencies to aid their arrest and prosecution.