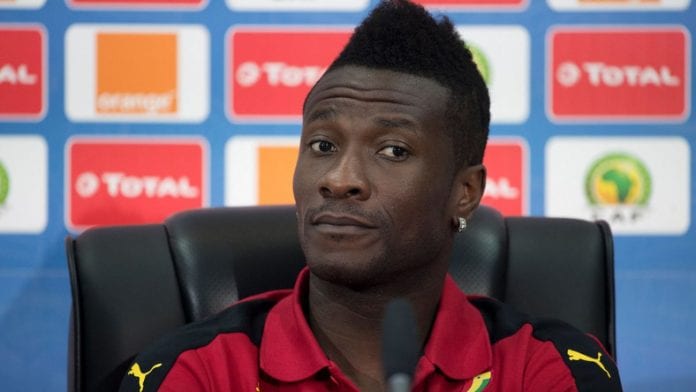 Financial Court 1 judge at the High Court, Her Ladyship, Justice Helen Vivian Amoah has ordered footballer Asamoah Gyan and his manager, Samuel Anim Addo (1st and 2nd defendants) to enter appearance and defense to a suit filed against them by entertainment journalist Anthony Osarfo (plaintiff).

The case which was called for the first time on Friday, May 14, 2021, saw Gyan and his manager in court — after almost one year of playing hide and seek with the court.

Lawyers for Asamoah Gyan pleaded with the court to grant them leave to file late appearance and defense.

On why they kept so long in entering appearance and defense, Gyan’s legal team told the court that the defendants were not in the country at the time the bailiff served the court processes on them.

The court, however, refused to award any cost against Gyan and his manager for wasting the court and the plaintiff’s time (plus cost of several filing of motions by the plaintiff).

The judge rather ordered the defendants to file appearance and defense within 14 days — starting today, May 14, 2021, failure of which will give the plaintiff the chance to move for judgment in default against the defendants.

The next court hearing will be determined when Gyan’s legal team serves the court and the plaintiff.

Background Of The Case—-

In June 2015, Daily Guide reported that one Sarah Kwabla is threatening to leak a s*x video involving herself and Asamoah Gyan. However, the said Sarah’s side of the story was not captured in the report.

Anthony Osarfo did a follow-up by getting in touch with Sarah and scooped fresh angles to the story. It came to light that Sarah did not threaten Gyan with any s*x video as Daily Guide reported, rather, she accused Gyan of raping and sodomising her.

The alleged act was captured by a CCTV camera in her house. In his defense, the footballer has admitted and maintained at all times to having consensual s*x with Sarah.

The Attorney General cleared Gyan of all the alleged criminal charges, though the case didn’t go to court for trial.

Suspecting Anthony Osarfo and Sarah had conspired to blackmail and extort money from Asamoah Gyan, Samuel Anim Addo reported Osarfo to the police. Osarfo was arrested and widely published on several websites and on the front page of Daily Guide.

Osarfo was later charged with extortion and conspiracy to extort money which is a Second Degree Felony in Section 151 of Ghana’s Criminal and Other Offences Act.

He was subsequently arraigned before court for prosecution.

In court, it turned out that Anthony Osarfo did not intend to blackmail Asamoah Gyan nor conspired with anyone to extort money from the popular footballer also known as Baby Jet.
Rather, it was Samuel Anim Addo who first proposed to give money to Osarfo for him to end his publications in Gyans interest, but turned around to accuse Osarfo of extorting money from the footballer.

Under cross-examination, Samuel Anim Addo (Complainant) revealed to the shock of the court that he reported the suspect (Anthony Osarfo) to the police and had him arrested based on advice from Gyan’s former lawyer, Kissi Agyebeng.

In her 16-page ruling, the trial judge, Her Ladyship Afia Agbanu Kumador, stated:

“1st Applicant (Anthony Osarfo) cannot be criminally held liable for conspiring with anyone to extort and indeed extort money from Complainant because the moment PW1 (Samuel Anim Addo) reported the matter to police and he agreed to entrap 1st Applicant, there was no threat operating on his mind which induced him to pay the money.”

After three and a half years of trial, Anthony Osarfo was acquitted and discharged. He was represented by popular lawyer, Maurice Ampaw.

Anthony Osarfo who once disclosed to the media how he was battered by police officers at airport police station till blood oozed out of his mouth and nose, decided to sue Gyan and his manager for malicious prosecution.

The plaintiff avers that: The 1st and 2nd defendants, to save and preserve their career and reputation, decided to make false allegations against the plaintiff and pressed upon the prosecution to prosecute the plaintiff for an offence they knew the plaintiff did not commit.

That with malice, the defendants withheld information from the prosecutors which would have ended the prosecution of the plaintiff and to exonerate him but intentionally failed to do so.

The plaintiff is praying the court for an order compelling the defendants to pay the Plaintiff General Damages of GHC 1,000,000, and legal fees.

Anthony Osarfo (Plaintiff) who through his new lawyer, Yaw Dankwa of Dankwa and Associates Chambers, has made several attempts since last year August 24, 2020, to direct service of the writ on the defendants but all attempts proved futile.

Lawyer for the Plaintiff therefore resorted to substituted service; where the sitting judge on the case, Her Ladyship, Justice Ellen Vivian Amoah, directed that the writ be posted at the premises of Ghana Football Association (GFA), the 1st defendant’s house (Basilica at new Weija), and the notice board of the High Court for 21 days.

The defendants called the bluff of the court—they refused to enter appearance and/ or defense.

The plaintiff, again, through his lawyer, filed a motion on notice for judgment in default of appearance-thus; the plaintiff sought leave of the court to notify the defendants that if they fail to come to court, judgment will be passed against them.

The judge upheld the motion and gave an order for the motion to be posted at the premises of Ghana Football Association (GFA), the 1st defendant’s house (Basilica at new Weija), and the notice board of the High Court, this time, for 14 days.

For the second time, the defendants failed to enter appearance and/ or defense.

After almost a year of serving the defendants, the plaintiff finally filed a supplementary affidavit and a hearing notice, praying the court to pass judgment against the defendants come Friday, May 14, 2021.

The defendants, through their lawyer, A. A. Somuah-Asamoah of Appiade Chambers, have filed a motion on notice for leave to enter late appearance and defense. In simple terms, they are now poised for litigation.

The defendants claim in their motion that they were out of the country when the bailiff served them.