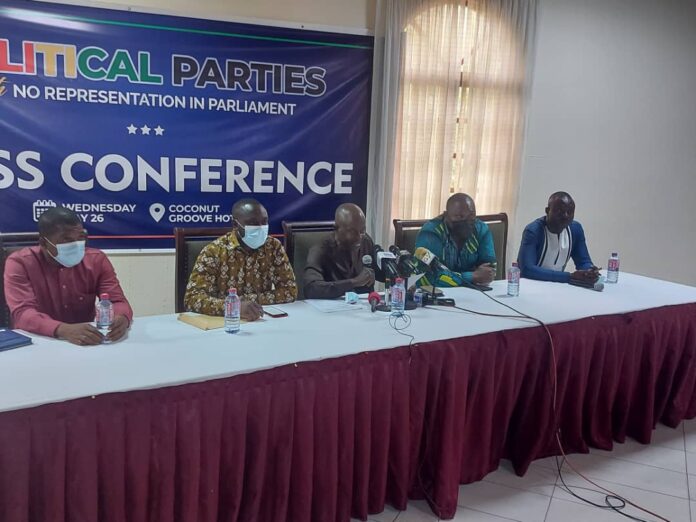 Political Parties outside parliament have described the NDC’s attitude and mindset towards the IPAC proposed electoral reforms as unfortunate and unwise .

At a press conference in Accra on Wednesday, 26th May, 2021, the political parties also condemned the NDCs continuous condemnation of smaller political parties stake in decision making at IPAC a meetings towards electoral reforms that seeks to strengthen our democracy.

“Political Parties outside parliament will therefore appeal to the NDC to place their wisdom gourd on their back so we can all together reach the zenith of our democracy for the peace and development of our people”, Alhaji Muhammed Frempong of NDP said in a statement read on behalf of the parties.

*BELOW IS THE STATEMENT BY THE PARTIES*

i. Supposed Temporary boycott of IPAC: Among many reasons the NDC assigned to its boycott of IPAC as pronounced by NDC Director of Elections is the inequitable voting rights at IPAC debates and denigrating other parties outside parliament. This contradicts the tendency and attitude of the NDC in the recent past when it rallied support of other parties to advance many objectives of the NDC. This is legion but suffice it to recount a few. The NDC enlisted the support of a Coalition called (IPRAN, Inter-Party Resistance Against New Voter Register of Ghana) featuring prominently Gyataba’s UFP, Odike’s UPP, Bernard Morna’s PNC, Ayariga’s APC, etc; and it is an open secret to all political actors who were involved and participated in several demonstrations throughout Ghana. By extension we could in future have the absurdity of the same equitable voice by segregation of number of votes of a parliamentary seat.

Today the NDC would call other Parties worthless but it forgets that it has pulled its own archival political parties as part of its voice, namely EGLE and Reform Party. Not long ago the venerable Ghana Freedom Party Presidential Candidate, Madam Akua Donkor, acted as the NDC Policy oracle and was prominent in the NDC Presidential entourage to Senchi forum as well as on foreign trips which included same allied Political Party Leadrs, namely, Gyataba, Akwasi Addai Odike, Bernard Morna, etc. What has changed now for this new position of seeking equity in voting at IPAC demanded by the NDC?

In keeping with a sound pluralistic atmosphere the participation by other political parties outside parliament has been and continues to be beneficial in nurturing our multiparty participatory Democracy.

Indeed any obnoxious impediments to widening the frontiers of participation of the citizenry and other political parties must not be accepted in the era of information technology and demand for national accountability.

Even though other political parties outside Parliament may be facing dire resource challenges we have the wealth of ideas, commitment and sincerity that match or even surpasses that of the duopoly in Parliament. Indeed it is also a known fact that we nurture and fertilize opinions of our citizenry in alternatives from which the duopoly pick a leaf or two.
The NDC should not forget that the CPP and to some extent the PNC derived from the PNP had once formed government and been in Parliament. Their present situation does not diminish their intelligence and policy relevance.

ii. NDC Alternate Reforms
The arguments the NDC advanced in its supposed alternate reforms could have been better stated and shared at IPAC and not outside. To consider its boycott of IPAC as temporary and to rejoin at any future date will just be a ploy to attract undeserved public attention, a disappointment and a dereliction of duty to its supporters.
A SORE LOSER:
The persistent condemnation by NDC of political parties that expressed support for the compilation of the 2020 new voters register at a joint IPAC and Eminent Advisory Committee meeting exposed NDC as a Sore Loser.

At a 2-day workshop in 2015 at Alisa Hotel political parties purportedly supported the NDC rejection of new voter register under Madam Charlotte Osei.
How “fia-fia” were the political parties then?
It is common knowledge that in a democracy obsession with desire for power does not translate into an entitlement when all parties must subject themselves to rules and process.

iii. Political Grandstanding
The saying that if wishes were horses beggars will ride aptly applies to the NDC in their unrelenting posture of seeing every act in our democratic process as going against them as the largest opposition.
It is a dictatorial and seditious attitude to think that the NDC should always have its way.
Indeed the NDC itself has Superintended over many of the issues it complains of today. The tradition has thus been inherited from the NDC.
We have seen the NPP in a minority which also pursued its demands but never boycotted IPAC, not that we may recall. The premises of the EC equally if not more has been militarized in the tenure of Madam Charlotte Osei when the NPP was a minority.

Again there must be a decent closure to every dispute pursued appropriately by a democratic process or adjudicated at competent court of jurisdiction. Political grandstanding in casting aspersions and innuendoes at democratically mandated state institutions smacks of deliberate sedition that the state has obligation to nip in the bud.