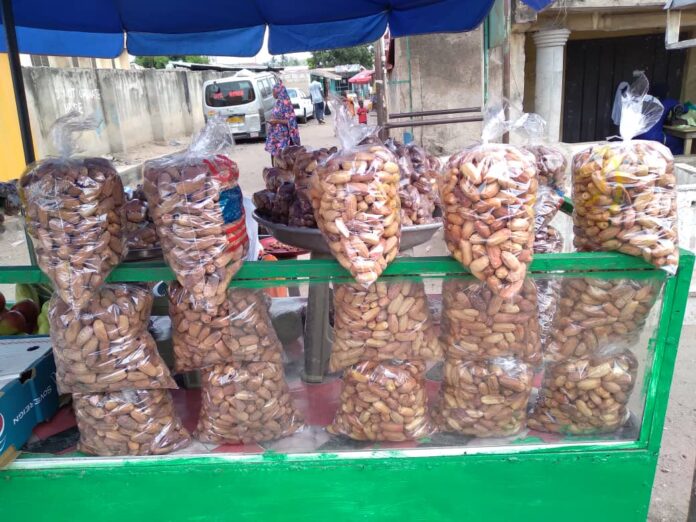 Dates otherwise Dabino in the Hausa language, are the fruit of the date palm tree, widely cultivated in the Middle East.

They come in different shades of brown and yellow, and grow to the size of a regular thumb with a brown cylindrical seed in the middle.

Aside its religious use, these sellers told Ultimate News, several persons both Muslim and Non-Muslim purchase the fruits for health benefits.

“Dates help women to have easy labor. You can even blend it into a child’s food. It helps them grow stronger,” a woman told reporter Salimatu Hawini.

Another seller recounted, “A man came here some time ago with the doctor’s advice to eat dates.”

“When we eat dates, it makes the skin fresh and boosts the immune system against all kind of diseases,” she added.

Medics indicate that dates are high in sugar, fiber and vitamin C, able to balance glucose levels after a long day’s fast.

They are also rich in potassium, magnesium, iron, and small amounts of protein and fat.

These fruits which have been grown for over 7000 years in the Middle East and Sahel countries including Algeria, morocco, Libya, Mali and Niger are however not spared the tale of myths.

The sellers believe with some marriage ritual of pairing female and male seeds; they can be planted anywhere else in the world including Ghana.

A seller who claimed there were male and female dates explained, “When you want to grow these seeds in Ghana; you must find the male and female seeds and wed them with drumming and dancing the same way you will have a traditional wedding before they can be planted.”

Till the fast ends, these sellers can make the best of sales. Dates will however be in the system for the rest of the year as people continue to appreciate its health benefits.