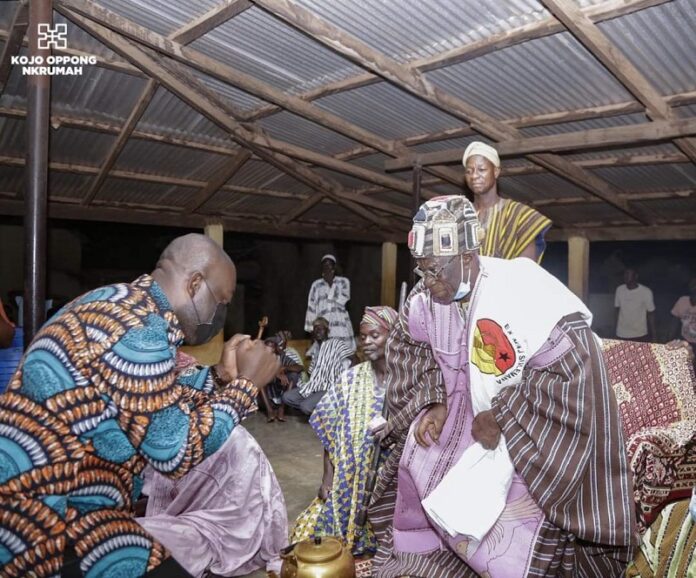 The Paramount Chief of the Tolon Traditional Area, Major (Retired) Sulemana Abubakari has honoured the Minister for Information, Kojo Oppong Nkrumah at the Tolon-Na’s Palace for his devotion to serving the country.

Mr. Oppong Nkrumah was in the northern part of the country as part of a three-day working tour of state-owned media houses in the five Northern Regions to acquaint himself with the challenges journalists face in their day-to-day operations.

His tour also took him to Tolon where he visited the Tolon-Na’s palace to pay homage to the Paramount Chief.

The Tolon-Na, in his remarks, praised Mr. Oppong Nkrumah for dedicating his life in service to his country and his resolve to doing more to advance information dissemination in the country. 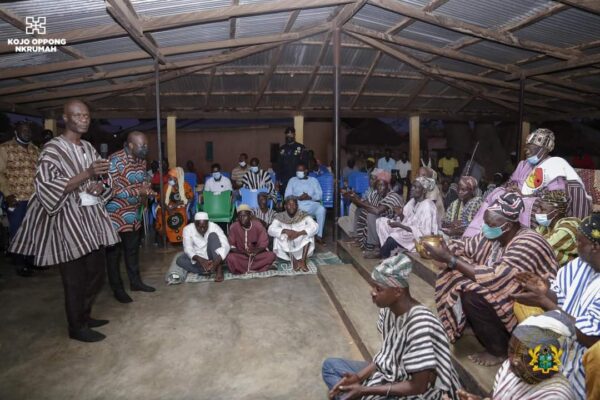 On his part, Mr. Oppong Nkrumah thanked the Paramount Chief for the recognition and promised to do more to advance the corridors of information in the country.

The Information Minister in his address to journalists in the five regions challenged them to project the economic potential within their regions. He said, journalists should develop a conscious culture beyond holding duty bearers accountable to portraying local economic opportunities in their regions in a way that will attract investors to harness these potential and most importantly create jobs for the local people.

“The media constitutes the fourth estate of the realm and this raises the question of what is the responsibility of the media in the national development exercise. One of them is to hold duty barriers accountable, another includes to draw the society’s attention to key issues that must be attended to but I think you also have to promote opportunities in your various communities.

“There are many communities with lots of potential and while we are not pleased with the level of economic development in those areas, we in the media space need to do more in projecting the numerous opportunities in our local areas,” he said.

This he said provides a support mechanism for journalists and provides the NMC with the needed platform to interface with journalists who come under physical attacks by investigating, validating and taking the necessary steps to seek legal action.

Galamsey: No fish can be found in Pra River; aquatic destroyed – Oppong Nkrumah