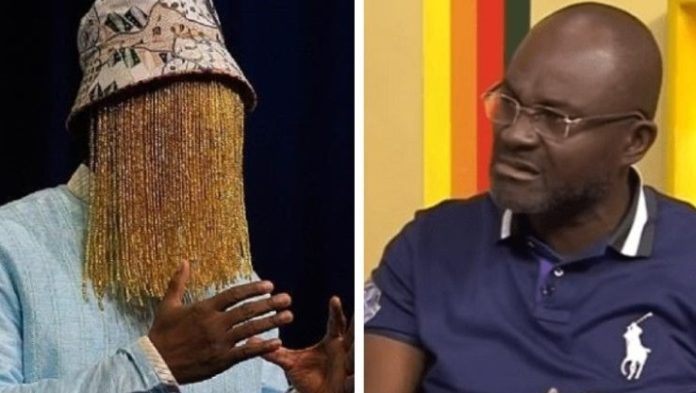 The High Court (General Jurisdiction) in Accra presided over by Justice Eric Baah has fixed June 29, 2021 to rule on an objection raised against portions of Evidence-in-Chief of Member of Parliament for Assin North, Kennedy Agyepong.

Mr Agyapong, a subject matter of GHc25m defamation suit from Ace Investigative Journalist, Anas Aremeyaw Anas had his Evidence-in-Chief filed on March 13, 2019, hit with an objection from Anas’ Lawyers.

In court on Monday, June 14, when the case was called after Anas had called two witnesses to close his case, lawyers of Anas raised issues with paragraphs 7 and 8 of Kennedy Agyepong’s evidence, which he was tendering.

Counsel for Anas holding brief for Kissi Agyabeng, (now Special Prosecutor) while raising the objection said, “Paragraphs 7 and 8 of the witness statement, also objected to some of the exhibits attached his “Exh KOA1, KOA3, KOA4.”

Paragraph 8: “However, Mr. Kwasi Nyantakyi could not raise the said amount but managed to get US$100,000 which Plaintiff vehemently refused as being insufficient thus went ahead to premiere the documentary.”

According to counsel, the basis of their objection to the paragraphs above is that, the said paragraphs and the mentioned exhibits are hearsay evidence contrary to sections 116 and 117 of the evidence act NRCD323.

He further stated that the witness in the box, has no personal knowledge as required under Sections of the Evidence Act, to speak or to testify to the deposition in those paragraphs and the videos captured as exhibit KOA1, KOA3 and KOA4.”

Concerning the video exhibits, counsel said, Kennedy Agyepong is not in any way, “connected to the said videos and therefore he is not competent and clothe with the least knowledge to speak on these matters.

“We, therefore, prayed the court. In our exhibits C b4 this Court, the witness is captured as saying on July 3, 2018 on Adon TVin twi…”he admits that he is not the author of KOA1 and that, said video was manufactured by salis newspaper,” he told the court.

He prayed the court that, based on the authorities cited those paragraphs and the exhibits be deleted from the respondent yet-to-be-tendered evidence in chief.

Rapheal Agyepong, Counsel for the Respondent (Agyepong) while responding to the objection said, “the basis of the objection is unmeritorious in law and in fact.”

According to him, in the plaintiff’s (Anas) witness statement filed on his behalf by Listowel Yesu Bukuson, the said paragraohs 7 and 8 that they are seeking to object to, is captured from pages 11, 12, 13 14 and 15 of their evidence.

Concerning n the issue of the video evidence, counsel said, “the plaintiff is in court seeking damages in GHc25m alleged to have been defamed on the basis of these videos, adding that, “All plaintiff’s two witnesses who came to testify, came to court to testify on these videos and does not lie in the mouth of counsel to object to that particular evidence he is relying on as the basis of his case.

He argued that “Cross-examination is to discredit a witness who may not be speaking to the truth in court, so if they think they have a good case, it would be better to cross-examine the witness for the court to know whether the videos he has brought before this court are hearsay or otherwise.”

He prayed the court to overrule the objection.

Justice Eric Baah, after listening to the parties said, the nature of the objection requires detail ruing and has adjourned the case to June 29, 2021 to determine the objection.

Anas was asking the High Court to award aggravated damages to the tune of GH¢25 million arising from defamatory materials published by the MP.

He said, the MP had been publishing materials in his bid to discredit the investigative journalist, who has released an explosive piece on the rot in Ghana football.

Displeased with the MP’s actions, Anas has, through his lawyer, Mr Kissi Agyebeng, sued Mr Agyapong for the award of general damages for defamation in the defendant’s publications.

A journalist, Mr Listowell Yesu Bukarson, has been granted the lawful attorney to stand in for Anas.

The publication complained of are a May 29, 2018 live programme in Twi on Adom TV, where Mr Agyapong categorically stated that Anas was a blackmailer, corrupt, an extortionist and evil.

According to the statement of claim, the defendant, in a similar manner, published defamatory words on May 31, 2018 via Oman FM, a private radio station owned by the defendant.

The statement of claim also stated that the defendant published more defamatory materials against the plaintiff via other platforms to the extent of releasing pictures purported to be those of the investigative journalist in his bid to blow the latter’s cover.