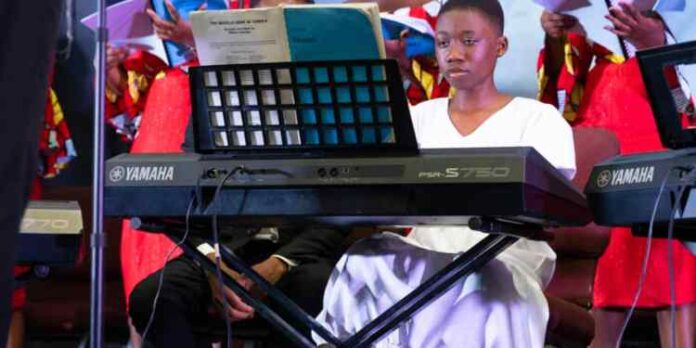 The forever graceful Ewuradwoa Obuobia Boateng, the young piano prodigy, blessed with the gift comparable to Ludwig van Beethoven has introduced herself to the global classical scene with grandiose.

The adroit pianist teamed up with one of Ghana’s best groups, the Harmonious Chorale to treat the global community to an intense and enthralling performance of classical music.

This unforgettable performance was dug from her classical music repertoire, sourced from the works of German composer, George Frideric Handel, the ‘Handel’s Messiah’.

The three (3) part performance which awed audience at the Trinity Baptist Church started with ‘Isaiah’s Prophecy of Salvation’ and ended with ‘The Acclamation of the Messiah’.

The 14 year old Ewuradwoa together with her team put together this performance not only to display her enviable talent but also to inspire other young ones to nurture their talent.

She believes with the support of parents, these inherent talents will be identified and bring about fulfilment and satisfaction in their lives.

Some say the gifted pianist’s performance of the ‘Handel’s Messiah’ is the first of its kind on the continent.

Messiah (HWV 56) is an English-language oratorio composed in 1741 by George Frideric Handel, with a scriptural text compiled by Charles Jennens from the King James Bible, and from the Coverdale Psalter, the version of the Psalms included with the Book of Common Prayer.

It was first performed in Dublin on 13 April 1742 and received its London premiere nearly a year later.

After an initially modest public reception, the oratorio gained in popularity, eventually becoming one of the best-known and most frequently performed choral works in Western music.