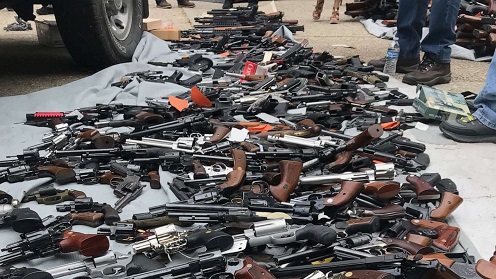 My Intelligence sources tell me that the security situation in town is not the best. Things are not getting better and it’s getting scarier and uneasy the way civilians are brandishing unlicensed guns with impunity in the Country.

The Security services are on top of their game but some few civilians, Criminals, and the various vigilante groups that cut across the political divide are making their work very difficult. When one takes a look at events upon events. The assault rifle called AK 47 that is being used by the security services has virtually become a common gun for criminals. Everyday AK Ak Ak.

Like was done in 2016 as I can recollect, the Government of Ghana must as a matter of urgency give all illegal gun owners amnesty to save the country. I will also advise that the usage of the AKs must be given a second opinion. Criminals are using the same assault rifle with impunity with the Security services and have mastered its usage. They can assemble and dismantle. They now have the effrontery to exchange fire with the security services when they are being chased.

It’s time we up our efforts as a nation and be on top of our game. I, therefore, plead with the government to once again reintroduce a weapons amnesty to individuals and groups to curb the proliferation of arms to save the situation.

Grant amnesty to those with unlicensed guns so that they can hand them over to the police or the Ghana Small Arms Commission (GSAC). Give a time frame for those who failed to take advantage of the amnesty and deal with them severely. This I believe will be done in consultation and following an assessment of the situation and based on advice from the security agencies.

The President His Excellency Nana Akuffo Addo must immediately direct the Ministry of the Interior, the Ghana Police Service and the Ghana Small Arms Commission to take steps to enhance the management and control of the proliferation of weapons by instituting a limited weapons amnesty exercise so that they can be destroyed like the galamsey equiment seized from illegal owners.

My research tells me there were still more than 4.1 million firearms and light weapons in wrong hands.

I will call on government to descend heavily on those who fail to hand over their arms. Other Security experts estimate that there are around 4.1 million weapons in civilian hands in Ghana, with only about 2.2 million being legally registered.

Ghana, a country paraded as a beacon of democracy in Africa, must continue to maintain its stake as a Gateway to Africa and One of the most powerful and influential peaceful countries in Africa.