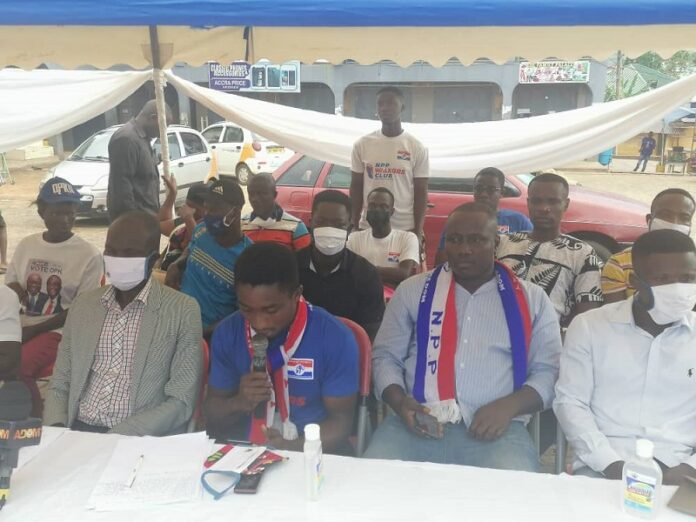 Some NPP groups and Assembly Members in Kwahu South Municipality have appealed to President Akufo Addo to reappoint their MCE Emmanuel Attah Ofori Snr to continue with the good job he has been doing.

Speaking at a press conference On Sunday 30th May 2021 at Mpraeso lorry station, the group said every good leader must have some qualities such as being honest, loyal, trustworthy, welcoming, truthful etc adding that, the Honourable MCE Attah Ofori Snr has proven beyond all reasonable doubts that he possesses all these qualities.

They outlined some developmental projects established under the leadership of the MCE since he resumed office in 2017.

According to the groups, the MCE has always placed the Municipality and the New Patriotic Party first in all his dealings, even before his family.

PRESS STATEMENT BY NPP GROUPS IN MPRAESO CONSTITUENCY TO HIS EXCELLENCY NANA ADDO DANKWA AKUFO-ADDO, THE PRESIDENT OF THE REPUBLIC OF GHANA, DATED 30TH MAY 2021.

We welcome you to a press conference to first appreciate the President, H.E. Dr Nana Addo Dankwa Akufo Addo and appeal to him to maintain the hardworking Municipal Chief Executive, who, together with our M.P. and the constituency, increased our votes in the 2020 elections.

We, the youth of NPP and various stakeholders of the Mpraeso Constituency, want to congratulate the President for winning the 2020 Presidential election for our motherland Ghana and the New Patriotic Party.

We are of the firm conviction that it was out of the unprecedented social interventions, flagship programs and policies President Akufo Addo initiated that made Ghanaians give the NPP this indisputable victory on 7th December 2020.
To mention but few are; FREE SHS, which has relieved a lot of parents of the burden of not being able to take their wards to the Senior High School, Restoration of Teacher and Nursing Training allowances which has helped many brilliant but needy student to be able to complete the Teacher and Nursing Training Colleges, 1 District 1 Factory which has also enhanced our industrialization drive to be very vibrant in our country today, Planting for Food and Jobs which has also helped immensely to improve the agricultural sector in the country, Year of Roads which the government declared and implemented has dramatically helped to improve the road network in the country. When we look at the Kwahu-South Municipality, we had a fair share of the Year of Roads and are hoping for completion.

You said it, and true to your words, you have delivered on same.
Numerous developmental projects are currently completed, and some ongoing in the Kwahu-South Municipal Assembly and the Mpraeso constituency. We are starting with the education sector, construction and renovation of school buildings, distribution of mono and dual desks to the various schools in the Municipality, amongst other things. When we flip to health and Sanitation, a lot has also been done to help improve the health and sanitation standards of the Municipality. When we turn to employment, the agencies such as the YEA, the NABCO have employed a reasonable number of persons in the Municipality who have stayed home for only God knows how long, over the years. When we talk of water, a lot has been done in the Municipality, from constructing mechanized boreholes to laying pipelines in communities such as Obo, Atibie, Obomeng, etc., which in the previous years were not having access to pipe-borne water, when we consider the plethora of projects Kwahu-South Municipal Assembly has seen since President Akufo Addo took over, as UNPRECEDENTED to say the least! For this reason, we express our heartfelt gratitude to the President. We say “Ayekoo”.

These projects were made possible in the Municipality under the excellent leadership of Hon. Emmanuel Atta Ofori Senior, the MCE appointed by the President for the Municipality in 2017 as the DCE when we were a District by then. Before he was appointed the DCE, he had served as the Mpraeso constituency chairman for the New Patriotic Party. On assumption of office as the chairman, he worked hard and toiled to make the defamed NPP in the Mpraeso constituency gain its grounds again because of his selfless leadership. For this reason, the entire District was amazed when he was finally appointed as the DCE in the year 2017 because we were all convinced that he would do the work very well. But since he assumed office as the DCE till now as the MCE, he has worked beyond the expectations of all the good people of the Municipality. For this reason, the chiefs in the Municipality have honoured him the name “Adwuma Wura”.

Ladies & Gentlemen of the Press, we all know that every good leader in his/her best capacity must have some qualities such as being honest, loyal, trustworthy, welcoming, truthful, etc. Hon. Emmanuel Atta Ofori Senior has proven beyond all reasonable doubts that he possesses all these qualities. He has always placed the Municipality and the New Patriotic Party first in all his dealings, even before his family. He respects everybody in the Municipality irrespective of age, position or social status. Whenever he is called upon in a situation, he always makes it a priority and ensures every support he has he gives to help save the situation. As a result of this, children, the aged and even chiefs are always happy with him. He has one thing he has always said during the time of campaign before the 2020 General elections. He said; when it comes to love, I have a love for the New Patriotic Party even more than my wife, and he has duly proved this statement through the diligent and selfless efforts he placed in the campaign process to see the NPP in the Mpraeso constituency increase its votes gained by 16% in the 2020 General election.

We have heard that very soon; the President will be releasing the list of MMDCEs to spearhead the governance in the MMDAs in the second term of office. There is an Akan adage that says “Nea oforo dua pa na yepia no”, and one that says “, Nea onim to na yede no gyina akyerene so” and as one of our Party slogans in the 2020 elections states precisely that “One Good Term indeed Deserves Another”. Therefore, looking at this extraordinary performance of the MCE for the Municipality, we, the people of the Kwahu-South Municipal Assembly and Mpraeso constituency, are pleading with the President to reappoint and maintain Hon. Emmanuel Atta Ofori Senior for us as the MCE of the Kwahu-South Municipal Assembly to continue the good works he is doing for the Municipality. We strongly believe that when he is reappointed as the MCE, he will do more than what he has even done in his first term of office.
Long Live Mpraeso Constituency!

The various Leaders of NPP Volunteer groups include: