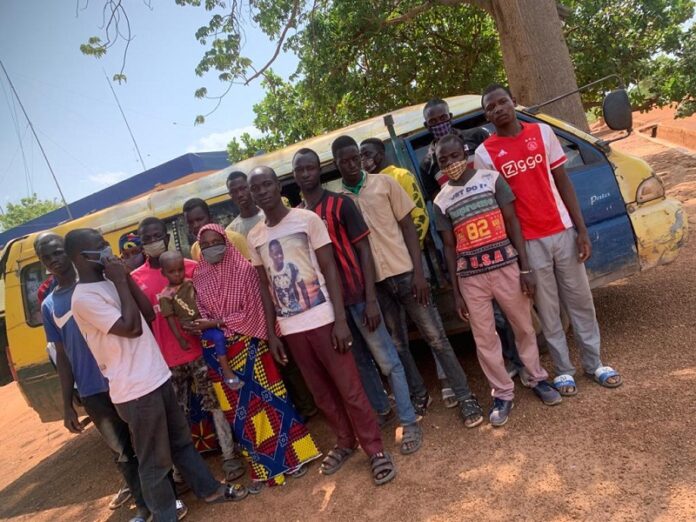 Vigilant Immigration officials on duty at Gwollu have apprehended some nineteen (19) Burkina Faso nationals who had sneaked into Ghana through the unapproved routes on the Gwollu stretch bordering neighbouring Burkina Faso.

The irregular migrants were seized on Wednesday onboard a Hyundai bus with registration number GS-4763-12 abound Wa.

The migrants comprised thirteen (13) males and six (06) females. Their ages ranged between eight (08) and fifty-eight (58). Our investigations revealed that the migrants were economic migrants journeying to Ghana for farming and other labourer activities. They were screened by the health personnel before being handed over to the Burkina Faso authorities on the other side of the border.

In another development, at about 1444HRS, on Wednesday, 09TH JUNE, 2021, the personnel at the Nandom district office busted seven (07) Burkina Faso nationals who also illegally entered into Ghana through unapproved routes on the Hamile stretch bordering neighbouring Burkina Faso.

They were fished out of Ghanaian passengers onboard a metro mass transit bus enroute Sunyani. The all-male irregular migrants were repatriated through the Hamile Border Post.

A statement signed by Assistant Inspector of Immigration, Ibn Yussif Duranah Abdul-Mumin Seidu said “as part of our efforts to clamp down on irregular, undocumented or prohibited migration to and from Ghana, we’re urging the general public to support the Border Security agencies to fight the menace.

“The public is therefore reminded that the Presidential directive on our land borders closure remains effective. Coupled with the strict enforcement of the border closure, irregular migration remains illegal. Anyone who’s caught facilitating the activities of irregular migration would suffer the consequences.”