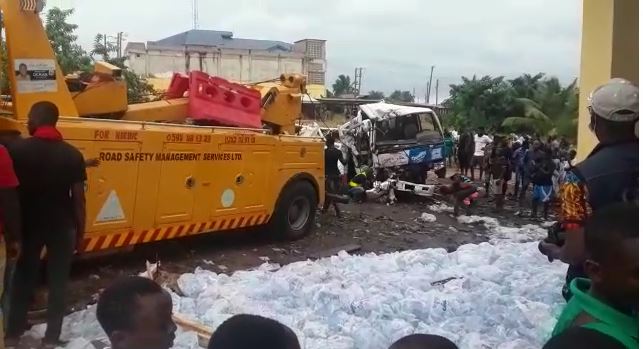 A truck has run over three women at 99 Junction in Agona Swedru in the Agona West in the Central Region.

The deceased are Edna Etison,18, Issah Wasila, aged 25, and other one unidentified.

An eyewitness told Kasapa News Yaw Boagyan that the three were on Tuesday buying fried yam by the roadside when the truck which had failed its brakes as it was descending a hill, rammed into them as the driver could not control the vehicle.

The driver is said to have started honking to alert pedestrians and bystanders when he realized he’d failed brake but unfortunately the truck run over the three women and drugged them along until it ran into a nearby storey building.

It took personnel from the Ghana Police Service and passers-by a couple some time to retrieve their dismembered bodies which were trapped under the truck.

The bodies have since been deposited at the morgue of the Swedru Government Hospital pending further police action.

The driver of the truck and three other occupants of the truck who sustained injuries are currently receiving treatment at the same hospital.

The Police have commenced an investigation.