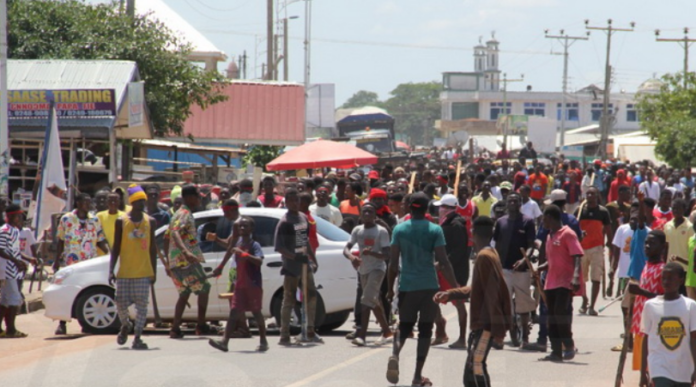 The Ashanti Regional Minister, Simon Osei-Mensah has revealed he authorized the deployment of security officers to Ejura Sekyeredumase in the Ashanti region following the riots in the enclave.

He told Ghana Kasa Morning Show host, Bonohene Baffuor Awuah on Kasapa 102.5 Fm that his decision to deploy men to the town was based on intelligence gathered that the youth had targetted to set ablaze the Police station and other installations in the town.

“I got intel that they (youth) said after the burial of Kaaka, they will move and burn the Police Station and burn to death two persons who the Police are keeping in custody in connection with the death of Kaaka. So I realized that wouldn’t help and truly they were going to do that,” he said.

Former President John Dramani Mahama following the Ejura killings has called for an investigation into the security rules of engagement, which resulted in the shooting to death of the two residents.

President Akufo-Ado on Wednesday ordered Interior Minister Ambrose Dery to conduct a Public Inquiry into the circumstances that led to the Ejura killings.

This comes after an activist of the #FixTheCountry movement, Ibrahim Mohammed, alias Kaaka was killed by unknown assailants for his advocacy at Ejura Sekyeredumase.

He is said to have had his head clubbed in his home Friday night by the assailants until he became unconscious and was rushed to the Ejura Government Hospital. He was later transferred to the Komfo Anokye Teaching Hospital in Kumasi where he died Monday afternoon.

Ejura killings: Don’t treat recommendations like you did with AWW report – MP to Akufo-Addo