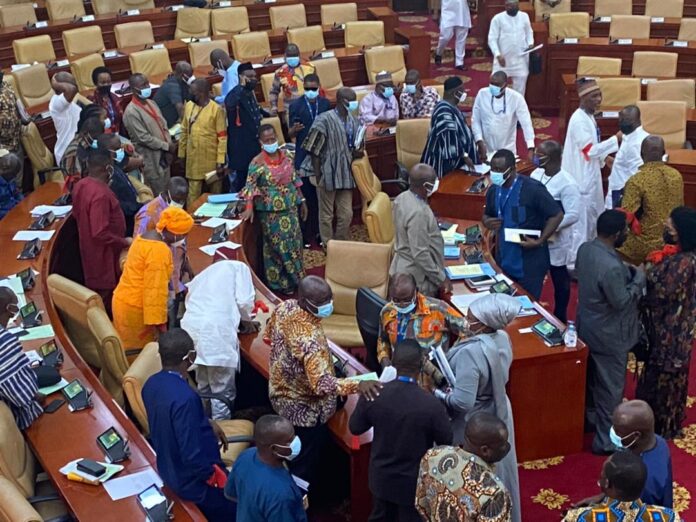 The NDC minority caucus on Friday, July 2, 2021, stormed parliament in red armbands in solidarity with victims of military brutalities in Ejura and Wa.

Speaking to Kasapa News after proceedings, Ellembele MP Emmanuel Kofi Armah Buah argued the general insecurity situation in the country is the reason why the NDC is embarking on such protest.

He argued the declaration by the police service that it cannot provide security for their planned demonstration will not stop the protest for justice.

According to the former Energy Minister, government can deploy the military to assault the protesters but that will not deter the NDC.

“…I think anybody who loves this country must speak out in anger, that this is not acceptable. We cannot allow security men to be aiming at innocent civilians and killing them just because they want to protest.

“Nothing will stop this protest. In fact, they can bring the military, the demonstration will still go on.”

Meanwhile, the Defence Minister Dominic Nitiwul has disclosed a committee has already been dispatched to Wa on a fact finding mission.

According to him, the military will be made to apologize to the people of Wa and the injured taken care of by the government.

First Deputy Speaker Joseph Osei-Owusu who was presiding consequently directed the Defence and Interior Committee to investigate the matter and report to the House within 4 weeks.

Akufo-Addo has lost control of the economy – Minority