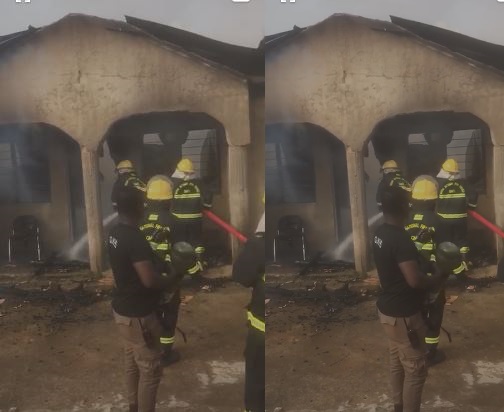 Several tenants have been displaced and their belongings destroyed after an inferno raged an entire house at Meduma Asorenkwanta in the Kwabre East District of the Ashanti Region.

Though the cause of the incident is not yet known, some residents believe it could have occurred due to a poor electric connection in the house.

The fire occurred when no one was at the house except a helpless child who then moved out screaming fiercely thereby attracting the attention of neighbors who came to her rescue.

Eyewitnesses say it took firefighters from Mamponten close to half an hour to approach the fire scene.

The landlady of the house Madam Precious Abena, wouldn’t speak with the press but began to count her losses.

They are therefore calling on government through the National Disaster Management Organisation(NADMO) and other benevolent organizations to come to their aid.

No casualties were however recorded.