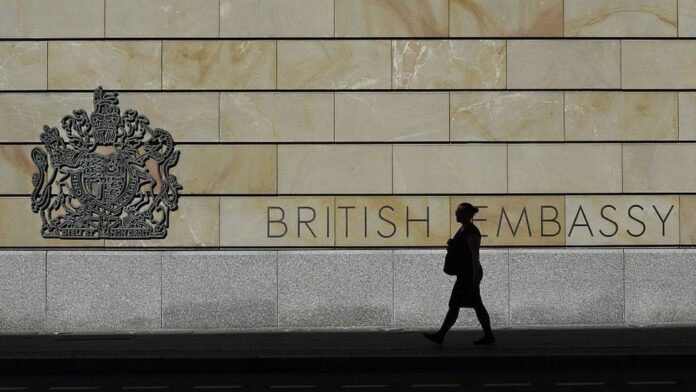 A British man has been arrested in Germany on suspicion of spying for Russia.

German federal prosecutors said the man – named only as David S – worked at the British embassy in Berlin.

He allegedly passed documents to Russian intelligence “at least once” in exchange for an “unknown amount” of money.

He was arrested in Potsdam outside Berlin on Tuesday and his home and workplace have been searched.

A spokesman for Germany’s foreign ministry quoted by AFP news agency said Berlin was taking the case “very seriously”, and said spying by “a close alliance partner on German soil is unacceptable”.

The arrest was the result of a joint UK-German investigation, the statement read.

It was intelligence-led and had been going on for some time leading up to the arrest, the BBC’s Security Correspondent Gordon Corera says. MI5 and other UK agencies, as well as British police, had been working with the Germans to learn as much as they could about the alleged activity.

London’s Metropolitan Police confirmed the arrest of a 57-year-old British national in Germany, as well as the involvement of the Met’s Counter Terrorism Command.

German authorities are in charge of the investigation, but officers will continue to work with German counterparts, the police said.

The man is due to appear before an investigating judge on Wednesday.

Prosecutors said he was hired as a local staff member at the embassy.

Berlin was the epicentre of Cold War espionage with spies working its streets and alleys in search of secrets.

Intelligence gathering has changed since those days and often involves cyber-espionage carried out remotely nowadays.

But the old ways have not disappeared. Spy services still seek out people whom they can recruit to pass on sensitive information and that makes embassies a prime target with Berlin still a major focus.

And it is not just diplomats who have direct access to secrets who spies are interested in.

Locally hired staff – ranging from drivers to security guards to cleaners – can also be targeted with cash or other inducements because they can provide access to rooms to plant listening devices or gather information themselves.

German and UK relations with Russia are already strained after several high-profile incidents in recent years.

The UK accused Russia of being responsible for a 2018 nerve agent attack in Salisbury against Sergei and Yulia Skripal – an accusation Russia has repeatedly denied.

Both survived the attack. But a local woman died after she came into contact with a perfume bottle thought to have been used in the incident and then discarded.

Germany meanwhile treated Russian dissident Alexei Navalny after he was poisoned with the Novichok nerve agent on a Russian flight last year. Russian authorities have also repeatedly denied their involvement in this incident.