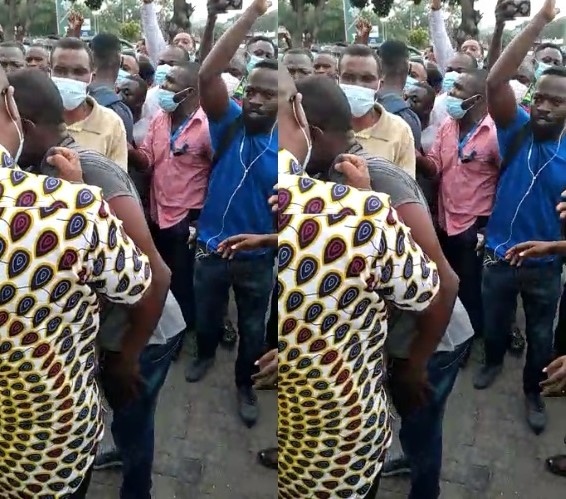 Workers of Ghana Airport Company Limited are demanding the immediate release of their locked up deductions for Staff Welfare, Insurance, Credit union, and Social Security and National Insurance Trust(SSNIT).

The demand follows a physical assault of a worker by the Managing Director for the company, Yaw Kwakwa during a staff meeting over the 13 months arrears.

The said assault which was captured on video in possession of Kasapa News has heightened the agitations from the workers who have been demanding the removal of Mr. Kwakwa over mismanagement for a while now.

SSNIT has however sued the Ghana Airport Company over failure to pay contributions of workers.

Speaking to Kasapa News about the development, the chairman for the local chapter of the Public Services Workers Union, Abdul Isaka Bamba described the physical assault on the worker as unfortunate.

According to Mr. Bamba failure to release the funds has brought untold hardship on staff who are unable to access loans from their credit union.

“The company owes the staff so much. Now if the staff can think of their Provident fund for instance being in arrears for over a year, that is a lot of money. Our credit union, that is what we set up ourselves to cushion our staff if they are in financial distress so that they don’t go to the banks. All these are in arrears for over a year and therefore staff cannot assess any financial assistance,” Bamba bemoaned.

It added: “We are expecting to get a repayment plan from management until then we don’t know how is going to end. All is not well, until we get our monies all is not well.”

Confusion at Textiles Ghana as MD sacks some workers

Airports Mgt. overspends approved budget by over GH¢25m amidst agitations over unpaid arrears