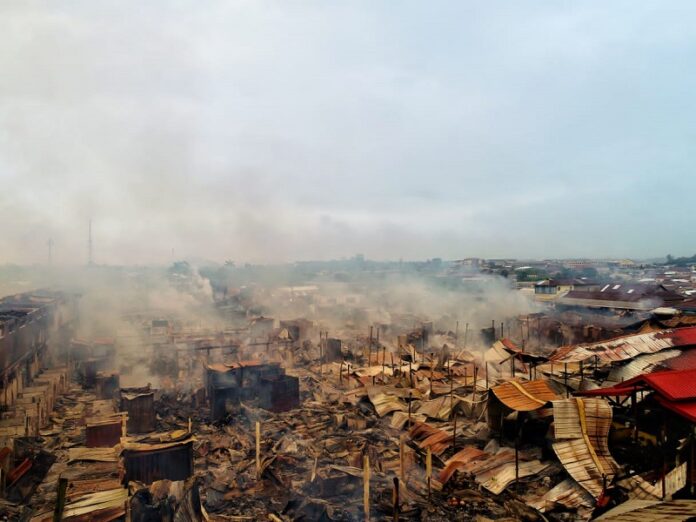 The main market center in Akyem Oda in the Birim Central Municipality in Eastern Region has been ravaged by inferno Monday night.

The fire outbreak started about 8:30 pm however firefighters from Ghana National fire Service were able to bring it under control at 2:00am due to lack of access road to the market.

An eyewitness said storey building shops around the market were also affected by the inferno.

Videos released captured some individuals rushing into the shops in an attempt to remove some of their items. However, no casualty was recorded.

Properties worth millions of cedis have been consumed by the fire.

A similar devastating fire outbreak occurred in the same market exactly eighteen (18) years ago on September 13, 2003.

In June this year, the Eastern Regional Minister Seth Kwame Acheampong cut sod for the construction of two World Bank-sponsored projects worth GH¢5.53 million at the Akyem Oda Central Market

The projects are 68 lockable market stores and ancillary facilities which come with precast blocks paving 3,000 square metres of the market and a 600-millimetre diameter “U” drain spanning 240 metres.

They are being undertaken under the Ghana Secondary Cities Support Programme.