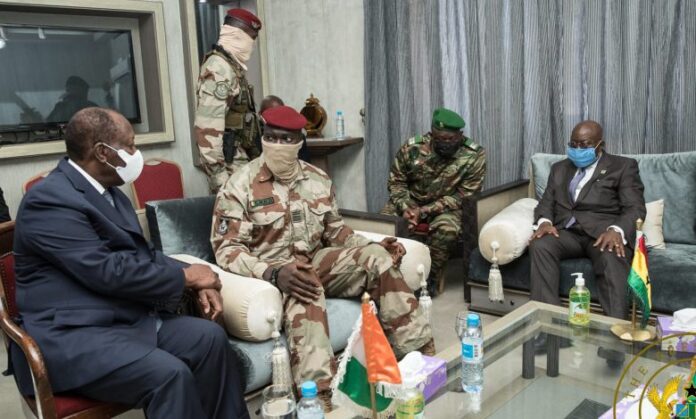 The Guinea military junta who seized power from President Alpha Conde, in a coup on the 5th of September 2021, have assured the Economic Community of West African States (ECOWAS), that they are prepared to respect the regional bloc’s six-month demand to restore constitutional rule as theirs is only a transitional arrangement to restore the country’s constitutional integrity.

President Nana Akufo-Addo, current chairman of (ECOWAS), together with Ivory Coast’s President Alassane Ouattara, Shirley Ayorkor Botchwey, Minister for Foreign Affairs and Regional Integration of the Republic of Ghana and Chairperson of the ECOWAS Council of Ministers and Jean Claude Kassi Brou, President of the ECOWAS Commission, on Friday 17th September 2021, visited Conakry to confer with the special forces commander and former French Legionnaire, Mamady Doumbouya.

Multiple sources in Guinea and the ECOWAS secretariat note that Colonel Doumbouya indicated to the delegation that he has no problem with the six month stay demand, and that his is a transitional government.

The visit came a day after the regional bloc slapped sanctions on the leader of the coup, his immediate family and associates. A communique issued after the one-day extraordinary ECOWAS summit held in Accra Thursday demanded from the military leaders, a swift return to constitutional rule.

President Akufo-Addo and his Ivorian counterpart, Alassane Ouattara, also met with the ousted Guinean President, Alpha Conde after their engagement with the military junta.

The ousted octogenarian leader, sources familiar with the high level visit say, was adamant about staying in Guinea and has no desire to leave to settle in another country.

President Alpha Conde in 2018 successfully secured constitutional amendment to run for office for a third term inspite of the widespread protests in Guinea as a result of the constitutional change.

The Guinea military junta has stated that the constitutional change is one of several reasons that motivated the decision to seize power from President Conde.

Akufo-Addo before leaving Conakry told journalists that he and his colleague Ivorian President Alassane Ouattara, had forthright discussions with the coup leader and his partners. He noted that he is hopeful that ECOWAS will find a way out of the political crisis in Guinea.

“We’ve had a very frank and fraternal meeting with Doumbouya and his collaborators. I think that ECOWAS and Guinea are going to find the best way to move forward together” President Akufo-Addo said.

At the end of the ECOWAS extraordinary meeting in Accra on the 16th of September 2021, the regional bloc decided “to uphold the suspension of Guinea from all ECOWAS governing bodies until the restoration of constitutional order”.

ECOWAS leader also decided “to ensure the conduct of presidential and legislative elections within six (6) months in order to restore constitutional rule in the Republic of Guinea” and to “impose sanctions, in accordance with extant ECOWAS Protocols, of travel bans on the members of the CNRD and their family members and of freeze of their financial assets”.

The regional bloc also called “on the African Union, the European Union, the United Nations, and other multilateral and bilateral partners to support the implementation of these sanctions and to ensure that no member of the CNRD is allowed to contest in the presidential election.