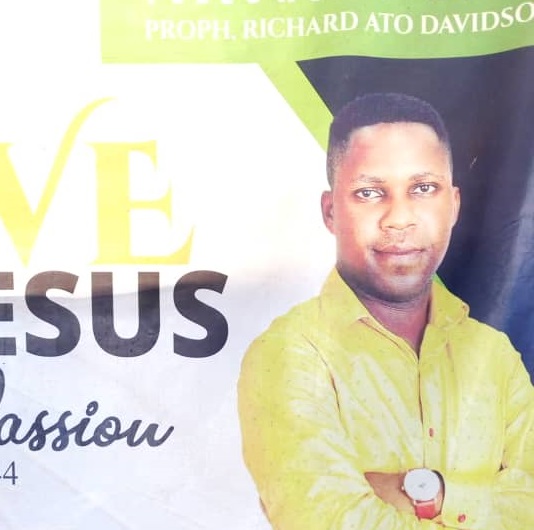 The Leader and Founder of Great Works Chapel International, Prophet Richard Atto Davidson, has been sacked and banished from Abura Amantsendo Community in the Abura Asebu Kwamankese District of the Central Region for sucking the penises of his male Church Members.

The traditional authorities demanded four sheep, six hens, four crates of eggs, yam, a box of Schnapp and Kasapreko amongst other items as well as 10,000ghc to pacify the gods since what he had done is forbidden and an abomination in the community before finally banishing him from the community.

Speaking in an interview with EIB Network Central Regional Correspondent Yaw Boagyan, the queen mother of Asebu Amantsindo, Nana Amensimakese lll on behalf of Asebu Traditional Authorities revealed that, since the case is in court, they will have time to wait for the court’s judgment but whatever the case may be, the authorities will demand those aforementioned items from the alleged fake prophet to pacify gods to eliminate the abomination from the community.

“He is not from this town so we won’t cast him out of the community due to the constitution governing chieftaincy but we won’t allow him to stay in our community again will let him go back to where he comes from,” she disclosed.

Meanwhile, Prophet Richard Atto Davidson has been arrested and in Police Custody and to appeared before Cape Coast District Court 2.

The case which was chaired by Her Ladyship Bernice Mensimah Ackon was adjourned to 19th October 2021 for proceedings to be continued.