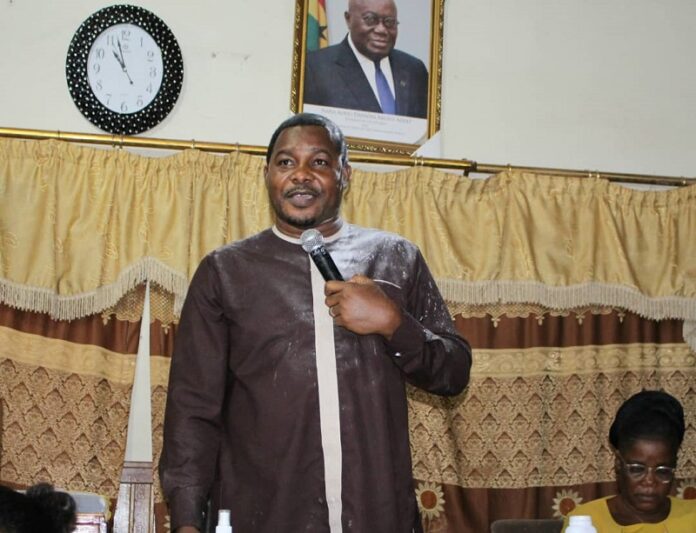 President Akufo-Addo’s nominee for the Obuasi Municipal Assembly, Elijah Adansi-Bonah, has been confirmed as Municipal Chief Executive by Assembly members.

Adansi- Bonah polled 28 votes out of the 28 ballots cast on the day, representing 100%. The elections were supervised by the Municipal Electoral Officer, Thomas Biyimba.

In his victory speech, Hon. Elijah Adansi- Bonah who could not hide his joy expressed delight over his election, and thanked the President for giving him another mandate to serve the people of Obuasi Municipal. He also thanked the Member of Parliament for Obuasi West Honorable Kwaku Agyemang Kwarteng for his support and cooperation throughout his first term of office.

He again expressed his gratitude to the Assembly members for reposing confidence in him and overwhelmingly endorsing him to continue his good works.

“I am overwhelmed and do not even know how to express my happiness. Though it has not been an easy battle, it has been a battle of confidence, hope, and hard work. That is what has brought me this victory”

Speaking to the media at the sidelines of his endorsement,  Hon Adansi-Bonah said the 100% votes attained places some responsibilities on his shoulders.  He said “In situations like this, when the people you work with repose such confidence in you, it only places a lot of responsibilities on you to work extra hard to bring development to the people you serve. This is exactly what I will do ”

He appealed to Assembly members, Nananom and other stakeholders in Obuasi to continue to support him. He promised to leave no stone unturned in his quest to serve the good people of Obuasi.

” I have worked hard throughout this period, I never rested on my oars because I knew a day will come where the people I work with, will give their verdict on my stewardship. The victory is evidence of the kind of efforts we have all put in over the years.

On what the people should expect from him in his second term, the MCE said there are two key projects that is dear to his heart which he is working hard to ensure they see the light of day. He mentioned the Obuasi Artisan Site which is expected to accommodate over 100 Garages and in a bid to have a one-stop shop for Mechanics in the Municipality. He said ” Now, everything has been put in place to prepare the site at New Biakoyeden. We are expected to move the Garages there soon”.

The Mce also talked about the Obuasi Recreational center which he said is modeled after the famous Kumasi Rotary Park. He said the land for the Recreational center has been acquired whiles other issues are being fine-tuned to ensure that the Assembly is able to out up the facility which is expected to bring revenue to the Assembly.

There were other solidarity messages from the District Chief Executives of  Obuasi East  and Adansi North Hon Faustina Amissah and Hon. Kwaku Kusi respectively.

HonorableElijahAdansi-Bonahwasfirstconfirmedas MCE for Obuasi on 4th May, 2017

Party bigwigs in the Obuasi West Constituency, members of Municipal Security Council, Heads of Department and the Media were present.