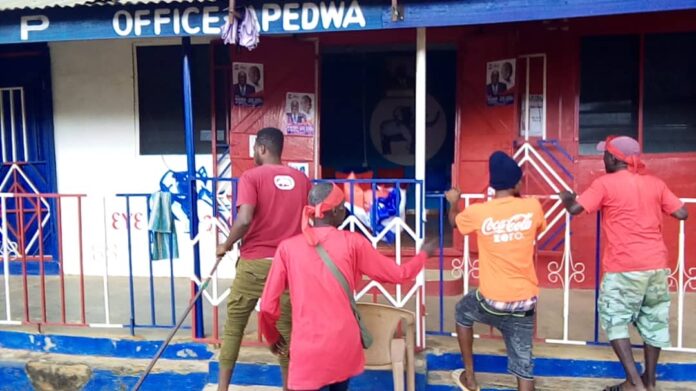 There is chaos in Abuakwa South Constituency in the Eastern Region as some angry supporters of the ruling New Patriotic Party, NPP, are protesting against the removal of the Municipal Chief Executive for the Area, Kojo Ofori Safo.

The aggrieved NPP supporters on Wednesday morning locked up the party office at Akyem Apedwa and burnt flags and other paraphernalia of the party in expressing their displeasure.

The supporters clad in red armbands and holding placards with inscriptions expressing their displeasure and chanting war songs said, all positions in Abuakwa South have been hijacked by people of Kyebi leaving other communities.

But aggrieved supporters of the party mostly from Akyem Apedwa community say the MCE was removed to satisfy the parochial interest of some individuals.

The disgruntled supporters said will no longer campaign for the party in the 2024 election.

There are seething agitations around the nomination of MDCEs in many Districts and Municipalities in the Eastern Region.

However, the Eastern Regional Youth Wing of the ruling NPP has implored all unsuccessful candidates who were vying for the metropolitan and District Chief Executive positions to support those nominated by the President to help facilitate unity in development.

This was contained in a statement issued by the Regional Youth Organizer Jerry Osei -Opoku on Tuesday.

We would’ve lost lives if Police had arrested me – Sosu