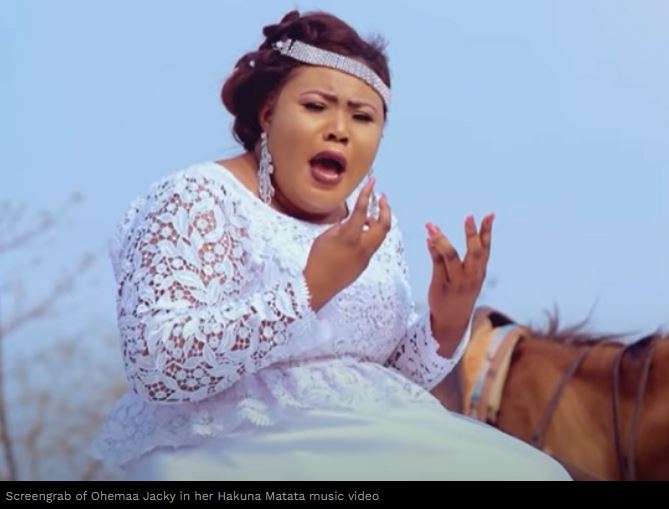 The Circuit Court in Accra presided over by Her Honour Mrs Evelyn Asamoah has granted bail to Ghanaian gospel musician, Jacklin Sarfo Gyamfua in the sum of GHc200,000 for engaging in fraudulent activities.

As part of her bail conditions, she is also to produce two sureties and report to the police every Monday till the final determination of the case.

The accused who earlier pleaded not guilty to the charges was remanded into police custody until today when she was admitted to bail.

The court granted her bail after her Lawyer Peter Safo Antwi moved the bail application on her behalf.

The prosecution led by Detective Inspector Frederick Sarpong, though did not oppose the granting of bail, said the terms should be in such a way that the accused will avail herself to stand trial.

On September 11, the artiste popularly called Ohemaa Jacky who is best known for her ‘Hakuna Matata’ song pleaded not guilty for allegedly defrauding a trader of GH₵150,000 under the pretext of securing her an Italian passport and resident identity cards.

The accused person who doubles as a blogger is also said to have forged two Italian passports for the trader and her infant daughter.

She has been charged with two counts of defrauding by false pretence and forgery.

The brief facts of the case were that, in February this year, the complainant and a witness in the case spotted the musician running adverts on social media platforms, purporting to be securing travelling passports and resident identity cards of every country within the European Union at a fee.

The complainant in the case is said to have expressed interest in travelling to Italy and contacted the accused Ohemaa Jacky through her Facebook advertisement.

The musician then promised to secure two Italian passports and two Italian resident identity cards for the complainant and her infant daughter at a fee of €24,000.

Ohemaa Jacky then requested the complainant to pay the demanded fee of €24,000 into any of the above-mentioned accounts.

The complainant accordingly deposited various sums amounting to €21,000 into the accounts provided by the accused.