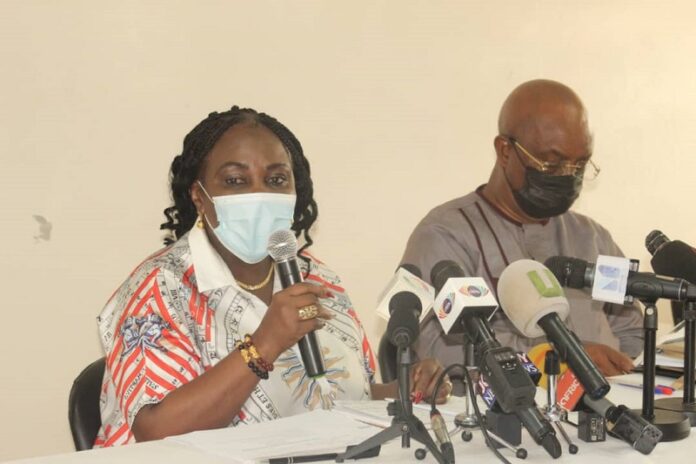 The Minister for Sanitation and Water Resources, Mrs. Cecilia Abena Dapaah has called on the private sector to put in more investment into the waste management sector.

According to the Minister, government is operating an open-door policy aimed at collaborating with the private sector towards the collection, treatment, and recycling of waste to create wealth, employment opportunities, and a healthy environment for Ghanaians.

Mrs. Dapaah made the call in Ho on Tuesday, 7th September, when she inspected work on the construction of the Volta Integrated Waste Treat Facility being built by the Jospong Group of Companies.

Background to the IRECOP Project

Work on the Volta Integrated Recycling and Compost Plant (IRECOP) began in October 2020 under the auspices of the Ministry of Sanitation and Water Resources.

The project is in line with government’s policy to set up waste treatment plants in all 16 regions of the country through a public-private partnership led by the Jospong Group of Companies.

During the inspection tour of the project on Tuesday, Chairman of the Jospong Group of Companies, Dr. Joseph Siaw Agyepong told the media that the facility when completed would have the capacity to collect and treat some 400 tonnes of solid waste daily from the Ho Municipality, Kpando, South Dayi, Ho West among other Districts and Municipalities.

He said, “The commencement of this landmark project which is the first of its kind has the capacity to receive and process up to 400 tonnes of solid waste. I am glad to announce to this gathering that by the end of this year, work ok all aspects of this project would be completed.”

By 2050, Ghana’s population would be exceeding 52 million people, 70 percent of whom would be living in the cities.

This further demands a sustainable urban solution to waste management challenges in the country.

In Ghana, about 5 million tonnes of municipal solid waste is generated annually out of which over 60 percent is organic.

The non-recyclable component of the waste generated in Ghana is about 20 percent, which means 80 percent can be recovered and recycled.

But this value addition process according to the Minister of Sanitation and Water Resources requires a huge investment that the private sector must be willing to venture into for wealth creation.

“The Ministry’s vision is also to tie into the President’s vision to make Ghana a clean country, especially our capitals. This is because in our rural communities, they don’t have much problem with waste; most of the waste they generate is organic. I stand here also to announce that government’s doors are opened 24/7 for other businesses entities and individuals to also invest in the waste sector.”

“This site visit is to encourage the Jospong Group of Companies in what they’re doing in the waste management sector. I know there are other groups doing so, I’ll entreat them to go further to invest and also take risk in this important sector because their efforts would not be in vain,” the Minister added.

The Minister, Mrs. Cecilia Abena Dapaah who is currently on a two-day working visit in the Volta region is also expected to inspect the progress of work on the Keta water project located at Agordome in the South Tongu District of the region.