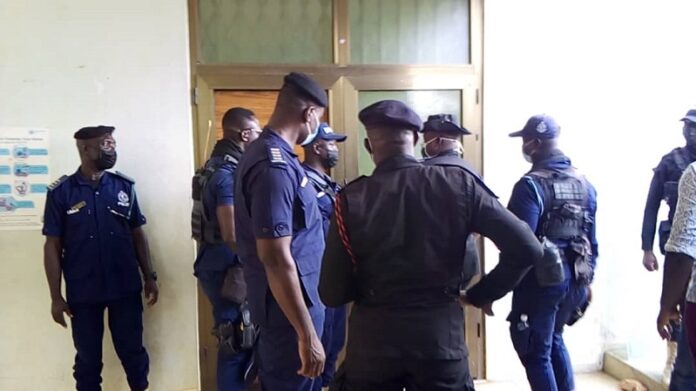 There was drama at Suhum in the Eastern region Thursday when armed Police officers took over the Suhum Municipal Assembly Hall and prevented Journalists from covering the confirmation of the Municipal Chief Executive nominee, Margaret Darko Darkwah.

Even Journalists following the Eastern Regional Minister Seth Kwame Acheampong were similarly blocked from entering the Assembly Hall where the election was being held.

The Suhum Police Commander, Superintendent Mohammed Cantona said he has been instructed to only allow entry of Assembly Members, the Regional Minister and, a few staff of the Assembly.

Some supporters of the ruling New Patriotic Party who had a keen interest in the confirmation exercise stormed the assembly upon hearing attempt to rig the voting exercise in favor of the MCE nominee.

They were agitating and raining curses on persons involved in the grand conspiracy to manipulate the process under bizarre circumstances.

The MCE nominee reportedly polled all 42 votes representing 100 percent confirmation despite see Assembly members claiming to have voted “No”.

The stranded Journalists subsequently boycotted an invitation by the Municipal Information Officer, Ms. Ivy to cover closing remarks after the declaration of the results.

The renomination of the Suhum MCE Margaret Darko Darkwa was heralded with controversies due to a feud between her, the Constituency Executives of her Party, NPP, and the Member of Parliament for the area.

The enmity has led to several clashes between supporters of the feuding factions.

One of such incidents was August 28, 2021, bloody clashes at a funeral between supporters of the MP and Frank Asiedu Bekoe alias Protozoa who is alleged to be from the camp of the MCE being groomed to oust the MP in the next primaries.

Many of the Assembly Members had earlier vowed to vote against the nominee whom they accused of being incompetent and very divisive.

‘Pray for us, Bawku tensions now beyond human interventions’ – MCE cries out