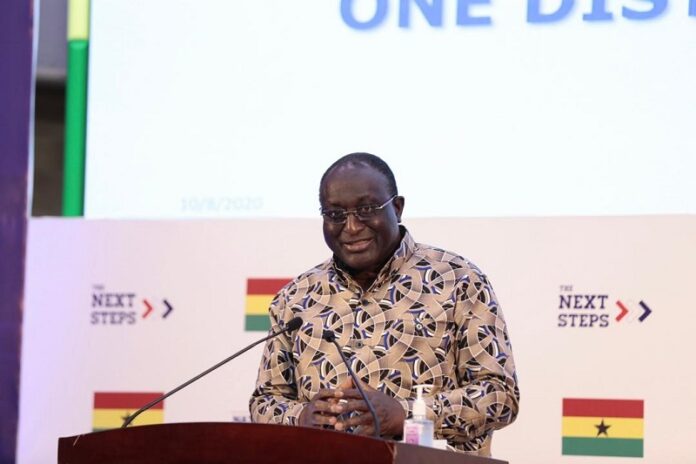 The Minister of Trade and Industry, Alan Kyerematen has rebutted claims that the Government is only rebranding some existing projects as 1D1F companies.

Critics of the Government’s flagship programme have always been quick to raise issues anytime names of projects under the programme are put out, asserting that some of the companies are not new but have existed for years.

However, addressing the press at a media encounter in the Ashanti region, the Trade and Industry Minister once again clarified that the programme is not only about the birthing of greenfield projects, but includes the resuscitation of existing but distressed companies as well as support to even vibrant ones who want to either expand or introduce new production lines.

In the words of the Minister, “if we say we are embarking on an industrial transformation agenda, if we say we want to stimulate industrial growth, what sense will it make if we allow struggling existing companies to collapse and say that we are supporting only greenfield projects? Why don’t we extend similar support to these struggling companies for them to get back on their feet so that we are able to sustain the livelihoods of the Ghanaians who have been employed there as well as increase their capacity to recruit even more?”

Alan Kyerematen had accompanied H.E. Nana Addo Dankwa Akufo-Addo on a tour of Darko Farms as part of the President’s visit to the Ashanti region.

The Trade and Industry Minister noted that Darko Farms is a testament of the wisdom of the President in extending the incentives of the programme to distressed but potentially viable projects.

Darko Farms and Company Limited is the oldest private and largest poultry farm established in 1967 with most of its operations located in Akropong in the Atwima Nwabiagya District of the Ashanti Region. Darko Farm was a household name for most Ghanaians for the production and sale of fresh wholesome and quality chicken. It dominated most supermarkets and distribution outlets for fresh chicken in Kumasi and Accra.

The company, however, went through a period of decline due to major challenges confronting the domestic poultry industry including: high cost of feed, high cost of borrowing, inefficiencies across the value chain, high electricity and operational cost, management and governance issues as well as cheap imports.

REVITALISATION OF THE COMPANY

As part of Government’s industrialization programme, the company was identified as one of the viable but distressed companies. In line with this, the company applied to be part of the 1D1F programme in 2017. Some of the interventions being undertaken by the Government through the Ministry to support the company include but not limited to the following:

As part of the effort to enhance poultry production in the country, Darko Farms is currently implementing an out-grower scheme where farmers are supplied with broiler chicks, feed as well as appropriate support to breed the birds and these birds at maturity are purchased by Darko Farms for processing on contractual basis.

The company is currently engaged with the Mohihani Group, the major local supplier of processed chicken for Kentucky Fried Chicken (KFC) and other big players in the food industry.  KFC through its local supplier has indicated its preparedness to off-take 100,000 birds monthly from Darko Farms under YUM certified conditions.

The company also has sales outlets in Accra and Kumasi and intend to open more sales-outlets in all the remaining 14 regional capitals.

1D1F: Govt spends over GHC260m as interest subsidies for 4 years