The Kwahu West Municipal Assembly has been ranked 5th position in the annual governance service performance contract for 2020.

At an awards ceremony in Accra yesterday (Oct 20), the Assembly was rewarded for its remarkable impact towards improving the livelihood of the citizenry through effective leadership and teamwork which has significantly improved service delivery to the citizenry in the Kwahu West Municipal Assembly successfully achieved majority of the targets in the 2020 performance contract.

A citation presented said, “the Kwahu West Municipal Assembly in the 2020 assessment year exhibited fineness in the execution of targets in key performance areas such as financial management and reporting, infrastructure and Human Resource Management.
The assembly embraced best practices and demonstrated enormous commitment to the implementation of its planned programmes. With a well-coordinated leadership, the entire staff and other partners worked closely in ensuring the Municipality made good use of its resources for sustained development. 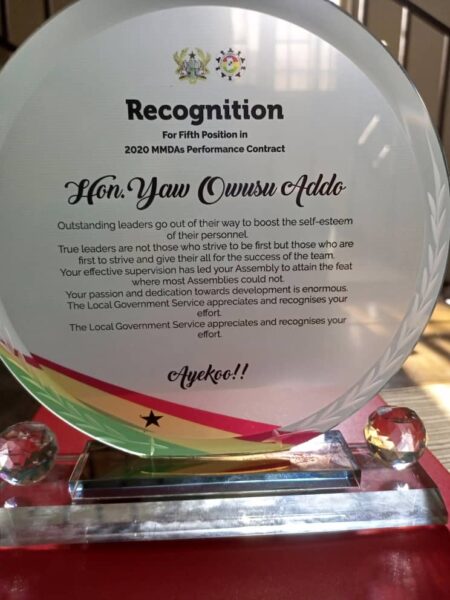 The service commends Kwahu West Municipal Assembly for its performance which has contributed immensely to the improvement in the socio-economic good of the people of the Municipality.’’

Speaking on Nkawkaw based Agoo FM, the Municipal Chief Executive Lawyer Yaw Owusu Addo said, this is good news to us, on-behalf of the team, I have lifted the Kwahu West Assembly from 117th position on the National Assemblies league table to 5th in four (4) years, this tells you exactly what we are doing for you all.

“When I started my work after resuming office as the MCE, I experienced so many verbal attacks on radio and other media channels over my job but I knew what I was doing. Nkawkaw must develop and I am determined to ensure the President’s and government plans for the assembly are achieved,” he stated.

The MCE also expressed the need to pay tax as citizens adding that most of the challenges confronting the assembly could only be addressed if tax mobilization improved positively.

He called for the support of the citizens to ensure Nkawkaw becomes one of the best districts in the country.

It is also to develop competencies, increase job satisfaction and achieve the full potential of all staff in the service in line with section 54(f &c g) of the Local Governance Act, 2016 (Act 936).

The contract is operationalized through the Performance Management Instruments (Contract & Appraisal) in which the service enters into agreement and commitment with its employees to set clear, quantifiable objectives and indicators for attainment within given timelines.

The Volta RCC beat the Savannah and Bono East RCC, which were adjudged second and third respectively, to clinch the coveted spot.

Nkoranza North District Assembly in the Bono East Region was also adjudged the best performing district in the rankings of Metropolitan, Municipal, and District Assemblies (MMDAs) in the country.