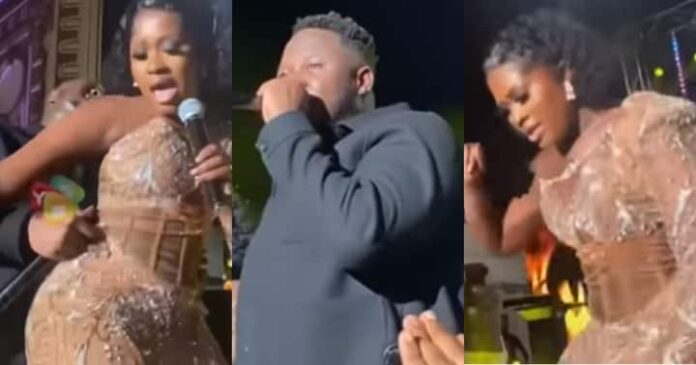 Rapper Medikal and his wife Fella Makafui performed some of his hit records at the just-ended Ghana Music Awards UK 2021 on Saturday, October 9.

The event, which saw spectacular performances from other Ghanaian artistes, was held at the plush Royal Regency in the UK.

Medikal, born Samuel Adu Frimpong, and his wife, Fella Makafui, an actress who dabbles as a serial entrepreneur, thrilled patrons at the event.

The power couple delivered a show-stopping act with some of Medikal’s hit songs.

At a point, Fella Makafui took over to sing her husband’s songs verbatim. The duo gave their all as Medikal was captured grinding his wife on stage. The dramatic moment Medikal pulled an act, falling on stage while gyrating behind Fella Makafui, has appeared in a video.