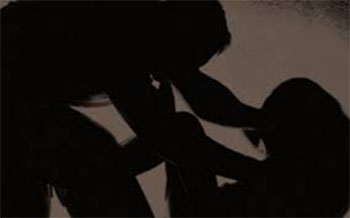 A 42-year-old police officer in the Volta Region is under investigation for allegedly defiling a class 5 Pupil of Ave Xevi Roman Catholic (R/C) Primary School in the Akatsi North District of the Volta Region.

The suspect, Sergeant Emmanuel Duah reportedly abducted the 13-year-old girl in a yet-to-be commissioned newly-built police station at Ave-Xevi for almost a day as he supposedly swerved duty at a barrier nearby and sexually assaulted her twice.

The victim was said to have had no previous sexual encounter before the incident.

Information gathered by DGN Online indicates that on September 29, 2021 at about 9am, the victim who resides near the police barrier was asked by her mother to go and fetch water for the household around the barrier.

On her way, the victim was called by the suspect to come and buy sachet water for him.
It was upon arriving when the suspect held the victim, pulled her into one of the rooms in the yet to be used police station.

Immediately, he forcibly pulled the underwear of the victim and had sexual intercourse with her.

As if that was not enough, he locked up the victim in his room and threatened her to keep mute before he went to his barrier duty.
The suspect returned after some few hours and pounced on the victim again.

The victim’s mother who had waited for several hours to use the water for household chores but to no avail became worried and started looking for her in the area.

Interestingly, the victim’s mother met the suspect on her way while looking for her daughter and asked the suspect whether he had seen her but the suspect responded in the negative.

The suspect quickly rushed to the scene and freed the girl to go home in the evening.

The victim arrived home but was unable to walk properly as a result of pain in the abdomen when she was questioned by the mother as to what happened to her when she narrated her ordeal in the hands of the policeman.

A complaint was quickly lodged at the Ave Dakpa Police Station and a medical report form was issued to the victim to attend hospital at any Government Hospital for examination and treatment.

The medical report duly endorsed by a medic, Dr. Samuel J.G Forster, Senior Medical Officer at Saint Anthony’s Hospital, Dzodze on September 29, 2021 at about 11:30 pm when the victim was attended to stated that the hymen of the victim was rugged (broken) in the outlined with a bruise around the left side of the vagina.

Confirming the incident to DGN Online, Chief Superintendent Peter Kamesah, Crime Officer of the Sogakope Divisional Police said his outfit is investigating the case as a suspect would be arraigned after investigations are completed.

According to him, the policeman has been cautioned and granted bail to return for further investigation.

He however stated that the policeman denied penetrating the girl but only fondled with her breast and other parts of her body.

The Crime Officer continued the policeman had started going through the procedure laid down by the law when serving as a police officer, adding that an administrative report would be sent to the hierarchy.