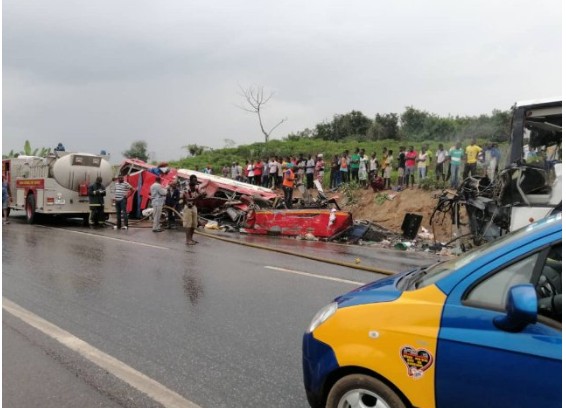 The Ghana Medical Association (GMA) has noted that the rate at which accidents are occurring in Ghana at the moment is unacceptable.

According to the GMA, the current menace of road crashes with 11,858 crashes of which there were 2,126 casualties in the first nine (9) months of this year alone is unacceptable.

On the average six (6) lives are lost per day in Ghana to road traffic crashes, it added.

The GMA said in a communique issued at the end of its 63rd Annual General Meeting (AGM) held in Sunyani from 2nd to 7th November 2021 that “Road safety in the country is bedeviled by pre-crash challenges such the general indiscipline of road users, poor road design and construction, exponential increase in motorcycle-related crashes and casualties, weak enforcement of road traffic regulations and the absence of a legislative instrument (L I.) for the NRSA Act, 2019 (Act 993).

“To curb the current trend of fatalities on the road, the GMA recommends the following: Dualization of major highways in Ghana and inter modal transportation, The conduct of a road safety audit with treatment of hazardous sections, Provision of rest stops every 80-100km along major highways to manage, fatigue. Automation of traffic enforcement, Continuous driver training, and training of trainers for motorcycle/tricycle riders.”

Regrading regulation of commercial road passenger, haulage, and transport-related services, it said “We urge all stakeholders in the road safety sector to work hard to avert more crashes during the Christmas and New Year festivities.”