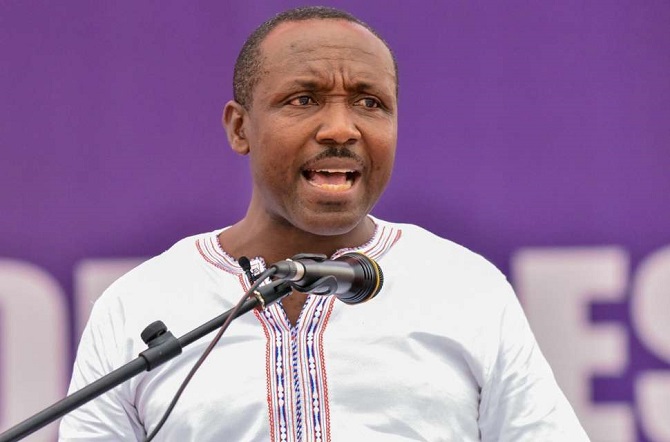 The General Secretary of the governing New Patriotic Party(NPP) John Boadu has slammed the Speaker of Parliament, Alban Bagbin over his recent public pronouncement, saying his position has gotten to his head.

The Speaker of Parliament recently stated that he can remove the president, Nana Addo Dankwa Akufo-Addo from office.

Speaking at the post-budget forum held at Ho in the Volta Region over the weekend, Mr. Bagbin was concerned that Parliament approves budgets that benefit the executive more than the legislature and the judiciary.

This, he said was their own making and asked that steps be taking to fix the situation.

“This year, all the laws we have been passing are laws we passed to benefit the executive, even we forget about Parliament in the language we use, this is self-inflicted; it is not a deficiency in the constitution, it’s a deficiency in Parliament itself. We must correct it”, he said.

He also reminded the Members of Parliament of the powers they wield in law and that they must as Parliament be able to stand for themselves and not to play to the whims and caprices of the executive. He cited for example that the house has powers to remove the president from office.

He however added that though he has such powers, he will not do it.

But this comment by the Speaker has not gone down well with some members of the ruling party who think the Head of the Legislative body is talking too much and sounding boastful.

Speaking at a press conference in Mankessim in the Central Region, the NPP Chief Scribe stated that the Speaker should be measured in his public pronouncement.

“He has forgotten that as the Speaker he has no vote and so even if the President is to be impeached the Speaker cannot be part of that exercise. But he’s running his mouth, I just don’t know what is wrong with him. His position as Speaker has gotten to his head and he’s saying all manner of things that are not right, but we need to indulge him. We can’t blame him, it is because of the “skirt and blouse” vote in the Central Region which caused the NPP that is why the Speaker is occupying that position.”