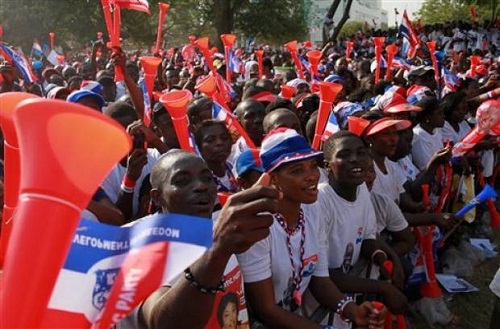 The New Patriotic Party (NPP) is gearing up for one of its major conferences to discuss issues of the welfare of members and consider recommendations from constituency and regional delegates conferences to improve the fortunes of the party.

The conference will also come up with initiatives to support the government to enable it to pursue the agenda to break the eight-year cycle.

Aside from them, national executives, national and regional council of elders, regional executives, metropolitan, municipal and district chief executives (MMDCEs), 12 delegates from each of the party’s external branches, as well as the various wings of the party, notably the NASARA, the women and the youth wings which operate under the National Youth Organiser, will also attend.

There will be no elections at the conference, to be held at the Baba Yara Stadium in Kumasi.

The General Secretary of the party, Mr John Boadu, who is expected to deliver a report, will also submit to the conference proposals for amendment of the party’s constitution that will inure to the benefit of the party.

Over the weekend, ahead of the conference, the party inaugurated a National Planning Committee (NPC) under the chairmanship of the First National Vice-Chairperson, Ms Rita Talata Asobayire.

It was charged with the responsibility of coordinating the activities of all the sub-committees to ensure the smooth organisation of the conference.

Per Article 10(2) Sub-section One, of the NPP Constitution, there shall be a national annual delegates conference which shall be the supreme governing body of the party.

Per the provisions of the article, the annual delegates conference shall meet once every year to, among others, deliberate and make appropriate resolutions on the National Chairperson’s statement, the General Secretary’s Report, the National Treasurer’s Statement of Accounts, among other provisions.

The last annual delegates conference was held in Cape Coast in 2020.

Ahead of the Kumasi conference, the NPP has placed a ban on all activities associated with internal party contests, parliamentary and presidential primaries, as well as the display of paraphernalia and advocacy for aspirants at the conference venue.

“Prior to and during the conference from December 18 to 20, 2021, no billboards and or signboards, banners or any kind of outdoor signage with the images and or names of individual members, with or without the consent of the individual, shall be acceptable. This applies to the area within the Greater Kumasi Metropolis. All such displays, if put up already, should be removed,” a statement issued by the party said.

The statement, signed by its Director of Communications, Mr Yaw Buaben Asamoa, said the decision was taken at a meeting of the National Steering Committee of the party last Thursday.

It said no T-shirts, flyers, brochures and/or souvenirs, branded and or embossed with the portraits and names of individuals, shall be allowed within the precincts of the conference, including but not limited to, places of accommodation for delegates.

“Any person, with or without his or her consent, whose image is flaunted on any advocacy material and who does not take active steps to desist from any public display of aspiration for a position within the precincts of Greater Kumasi runs a higher risk of disqualification in the event nominations are declared open,” it said.

It said the 2021 National Annual Delegates Conference was a time of renewal for the party.

But the situation on the ground in Kumasi is different, as some supporters of some aspirants have mounted billboards and other campaign materials.

Some of them were mounted before the party placed the ban on campaigning at the conference.

Similar scenes are found in other parts of the country.

Meanwhile, at a press conference in Accra yesterday, Mr Buaben Asamoa called on metropolitan, municipal and district assemblies (MMDAs) to ensure that all outdoor displays were removed, in line with the party directive.

He said the call to all aspirants to refrain from campaigning and restrain their supporters was nothing less than a call to leadership.

“We will be grateful to aspirants to exhibit supreme leadership in their quest to lead by voluntarily complying with the party directive not to campaign in Greater Kumasi pre- and during the conference,” he said.

He said following the notice by the party, issued on December 10, 2021, banning the display of paraphernalia of all kinds and personal advocacy by leadership and aspirants around the upcoming conference of the party, many would-be aspirants, members, friends of the party and concerned Ghanaians, home and abroad, had expressed their views.

Majority of them, he said, appeared to be in favour of the ban, but a significant group, including but not limited to supporters of some would-be aspirants, expected further clarification.

“That is not surprising, given that many supporters and friends of some aspirants have organised themselves in readiness and even contributed to provide the paraphernalia that the party has said they cannot use,” he said.

Also at the press conference, the Presidential Adviser on Health, Dr Anthony Nsiah-Asare, said all delegates would be required to show their vaccination cards before being allowed into the venue for the conference.

That, he said, was part of efforts by the government to contain the spread of the COVID-19 pandemic.

According to him, with December declared Vaccination Month as a result of the large number of vaccines in the country, it was required of everyone to get vaccinated in order to prevent the spread of the COVID-19.

Dr Nsiah-Asare said all the safety protocol, including social distancing, wearing of face masks, the use of sanitiser and the washing of hands with soap under running water, would be adhered to.