The Ghana Police Service says it’s not within its remit for them to enforce the law in parliament.

“The legal position is that the Police have no authority to enter the Chamber of Parliament to undertake any law enforcement venture. Any such act will be in the contravention of the laws of the country,” the police said in a statement on Tuesday.

This explanation comes after the Monday night scuffle between Members of Parliament.

There have been concerns that it[Police] failed to call MPs to order during the widely condemned fisticuffs on the floor of parliament.

But the Service maintained that mostly in such cases, the Marshal of parliament will have to step in and contain the violence while it later refers the matter to it for prosecution if leadership so wishes.

Meanwhile, it said: “We have however initiated steps to engage the clerk, Marshal, and leadership of Parliament to fashion out a more proactive way of supporting Parliament in this regard within the confines of the laws of the country.”

Below is the statement from the Police 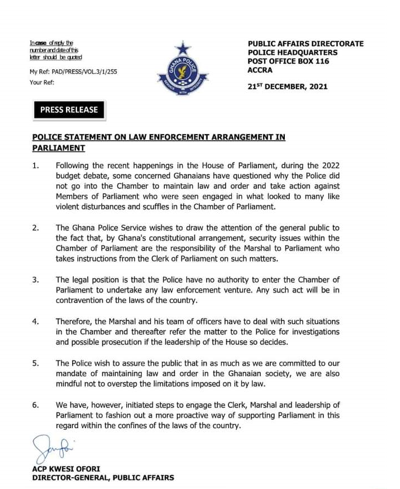