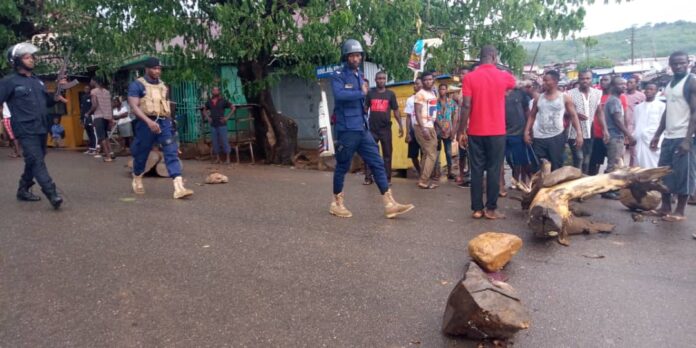 According to the report, members of the group are incensed that GWCL has failed to lay service pipelines to distribute water to homes in the Municipality.

The report cited by Kasapa News further said, members of the group claim they have laid pipeline to their various homes however GWCL is charging exorbitant fees before connecting them to the main water distribution lines which many are unable to afford hence denied water supply.

The National Security report has therefore alerted the Lower Manya Security Council (MUSEC) to roll out proactive interventions to avert the intended attack.

The situation appears to deepen sense of entitlement among many Krobo Communities about non-payment of bills seems to be pervasive and hurting the finances of utility companies.

Kasapa News has gathered that the Ghana Water Company Limited (GWCL) in Eastern Region is facing a similar challenge of non-payment of bills by Krobo Communities in their operational areas.

The Electricity Company of Ghana, ECG, on December 6, 2021 disconnected power to Yilo and Lower Manya Krobo Municipalities over similar challenges as well as the tempering of their transformers amid threats.

Power was however restored Sunday, December 12, after some resolutions were reached.

But it is also emerging that Krobo communities around Bukunor water treatment plant including Oterkpolu and Bukunor have refused to pay water bills since 2019 stating that, they are entitled to free water supply since raw water is pumped and treated on their land for distribution to other parts of the region.

The situation coupled with hostility meted out to workers of GWCL at the Bukunor Water treatment plant got the Eastern Regional Security Council (REGSEC) to intervene to resolve the impasse but to no avail.

Management of GWCL has therefore dragged the assembly member and the Chief of Oterkpolu to court for allegedly inciting residents not to pay water bills after their petition for free water supply by GWCL was not agreed to.

The feud between the Krobo communities and GWCL continues to escalate since the construction of the Bukonor water treatment plant in 2009.

Some of the Krobo Communities around the facility have been agitating for not benefiting from the treated water supply from the plant. They have held several demonstrations to that effect.

In November 2019, Armed Police personnel numbering over twenty (20) was deployed to Poponya fantem, a farming community where raw water is pumped for treatment after residents attacked some workers of Electricity Company of Ghana (ECG) and Ghana Water Company Limited (GWCL) and held one hostage.

The ECG and GWCL workers were working on a major electrical fault on the GWCL installation hence switching off power to the area to enable it to fix the problem but residents were unhappy hence attacked the workers.

In July this year, the Management of GWCL in the Eastern region under the leadership of the Regional Chief Manager Ing. Asomani Nyarko held a public forum in Somanya to encourage residents to pay their bills and also admonished them to stop illegal connections.

According to the manager, the high rate of illegal connections in the Krobo area was affecting the operations of the company. The Eastern Regional Minister Seth Kwame Acheampong warned that REGSEC will not entertain impunity hence urged residents to allow GWCL to have access to their meters.

However, some of the residents were seething with anger.

“I don’t think we will be patient listening to promises. They are saying that Tema people will not agree for the pipelines to be tapped to supply us look at the nonsense. Their line too is on my land and you are saying that you will not agree. Krobo men are all silent, I bet you if you get me five of my type, tomorrow we will just tap that line. Then we will look at what Tema People will do to us on a pipe that serves them from my land. Water is a right not a privilege “Ebenezer Tei Narteh, Assembly Member for Otorkpolu Electoral area told Kasapa News.

Assembly Member for Kpong Ahodzo Electoral Area where the biggest water treatment plant in Ghana is located, Raymond Kofi Elikplim said, “It is very painful that you have water and you are thirsty. It is inhumane, We of Somanya having water challenges have complained for over a decade. Water is being pumped daily from Akorley to Akuapem ranges and they have water almost every day at Adukrom onwards to Akropong and those of us at Somanya don’t have water. So, we requested the manager of GWCL can we be connected to that line, he said no, can we also be connected to Tema line on Akuse junction, the district manager said no it cannot be done”.