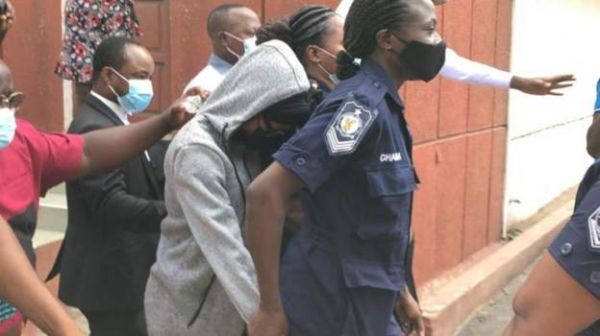 The High Court in Accra presided over by Justice Ruby Aryeetey has dismissed the appeal filed by Rosemond Alade Brown challenging her 90 days custodial sentence.

What this means is that Akuapem Poloo will now serve her 90 days jail term imposed on her by the Circuit Court.

The court while affirming the Circuit Court decision said the punishment imposed was to cause much harm to the convict which will then become a deterrent to herself and others.

To this end, the court said, the decision of the Circuit court was right and the High Court will not interfere with it.

EIB Network’s Court Correspondent Murtala Inusah reports that the court has also ordered that her son should be given to any competent person in the family to take care him.

Akuapem Poloo is currently sobbing while the court has indicated she should continue her jail term from where she left off from Nsawam.

On April 16, Actress and social media personality Rosemond Brown is popularly known as Akuapem Poloo was jailed for 90 days or three months by an Accra Circuit Court.

This was after Akuapem Poloo pleaded guilty to three charges.

She was charged with the publication of nude pictures with her seven-year-old son. She changed her not guilty plea to guilty before being convicted.

She was sentenced to 90 days on each count but the court said, the sentence must run concurrently.
This means she will only serve a 90-day jail term which is three months.

The Court presided over by Her Honour Mrs. Christiana Cann, said such cases are becoming prevalent in society, and Institutions including the court must act.

The court said it took into consideration all the plea for mitigation before arriving at the decision.

Before her sentencing, the presiding judge confirmed that the actress was not pregnant after her test came out negative.

The pregnancy test ordered by the court is a requirement by law to ensure that, before a woman who pleaded guilty in court is sentenced, the court should know her status.

She was then remanded into custody for the prosecution to take her to any Government hospital to conduct the pregnancy test and produce the results.

The outspoken actress was charged with three counts of publication of obscene materials, engaging in domestic violence, conduct that in any way undermines another person’s privacy or integrity, and engaging in domestic violence namely conduct that in any way detracts or is likely to detract from another person’s dignity and worth as a human being.

Rosemond who had displayed her naked picture with her son on social media on June 30, 2020, earlier pleaded not guilty to all the charges.