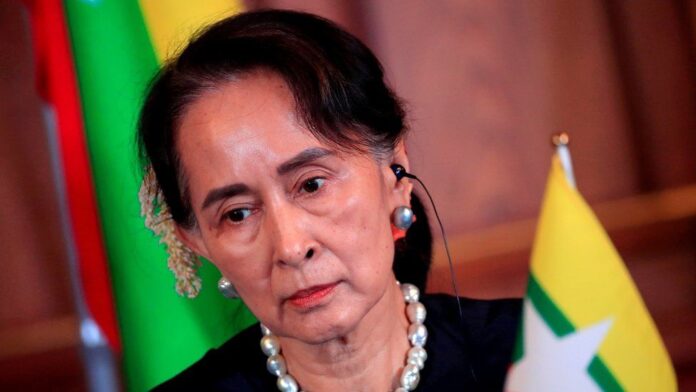 Ousted Myanmar leader Aung San Suu Kyi has been sentenced to four years in prison, the first in a series of verdicts that could jail her for life.

She was found guilty on charges of inciting dissent and breaking Covid rules under a natural disasters law.

Ms Suu Kyi faces 11 charges in total, which have been widely condemned as unjust. She has denied all charges.

She has been under house arrest since a military coup in February which toppled her elected civilian government.

It is not clear when or if Ms Suu Kyi will be placed in prison.

Rights group Amnesty called the charges “bogus”, saying it was the “latest example of the military’s determination to eliminate all opposition and suffocate freedoms in Myanmar.”

Ms Suu Kyi is next due in court on 14 December, when she will face charges of possessing illegal walkie-talkies.

The 76-year-old has been slapped with an array of charges, including multiple counts of corruption and violating the official secrets act.

In one case, Ms Suu Kyi was convicted of violating Covid restrictions for waving at a group of supporters during last year’s election campaign while wearing a mask and face shield.

In the other she was found guilty of inciting unrest for a statement calling for public opposition to the coup, put out by her party after she had already been taken into custody.

Ms Suu Kyi’s lawyers, who had been the sole source of information on the legal proceedings, have also been served with gag orders forbidding them from releasing information.

Little has been seen or heard of her apart from her brief court appearances.

A spokesman for the newly formed National Unity Government, a group made up of pro-democracy figures and opponents of the coup, had earlier told the BBC Ms Suu Kyi was struggling.

“She is not OK… military generals are preparing for 104 years of sentences for her in prison. They want her to die in prison,” Dr Sasa said.

The military had seized power alleging voter fraud in general elections held last year in which the NLD won by a landslide.

However, independent election observers have said the elections were largely free and fair.

The coup triggered widespread demonstrations and Myanmar’s military has cracked down on pro-democracy protesters, activists and journalists.

Ms Suu Kyi is one of more than 10,600 people to have been arrested by the junta since February, and at least 1,303 others killed in the demonstrations, according to the monitoring group Assistance Association for Political Prisoners.

An icon who fell from grace

Aung San Suu Kyi spent nearly 15 years in detention at the hands of the military between 1989 and 2010, and was awarded the Nobel Peace Prize for her work to bring democracy to Myanmar.

Her party, the National League for Democracy (NLD) won a landslide victory in 2015, but she was prevented from becoming president herself by rules excluding those with foreign national children from holding that office. She was widely regarded as the de facto ruler of the country.

However her reputation abroad was severely damaged by the way she handled the Rohingya crisis, which started in 2017.

In 2019 Ms Suu Kyi appeared at the UN International Court of Justice (ICJ) to defend her country against accusations of genocide.