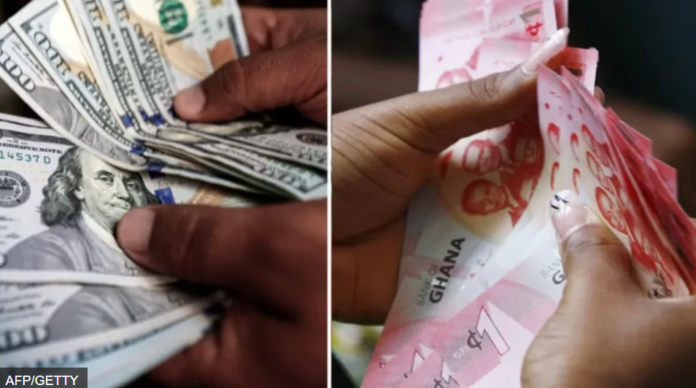 The local currency has recorded its highest depreciation in the year against the US dollar, as demand for the greenback by importers increases ahead of the festive season.

Daily interbank FX rates data published by the Bank of Ghana show the cedi is currently trading at GH¢5.7602 (mid-rate) to US$1, indicating the local currency has depreciated by 3.2 percent as of December 21 from the 2.6 percent depreciation it recorded at the end of November.

From a historical perspective of the data, the cedi’s depreciation against the US dollar ahead of the festive season is quite normal, as last year the local currency lost value of 3.1 percent, 3.2 percent, and 3.9 percent in October, November and December respectively.

Besides rising demand for FX by importers that has triggered a sharper depreciation of the cedi against the US dollar, another development, according to the central bank, that has fostered the situation is some foreign investors’ decision to pull out due to debt sustainability concerns.

“The country’s sovereign bond spreads widened markedly over the period as investor sentiments shifted based on fiscal and debt sustainability concerns, prompting some sell-offs by investors with spillovers on the domestic foreign exchange market. This triggered some currency pressures in the past two months as demand for the U.S. dollar increased,” the Monetary Policy Committee (MPC) statement said.

Despite the depreciation, the MPC remains confident that the FX buffer at the Bank of Ghana is robust enough to stabilise the local currency.

“However, the adequate reserve level provided a buffer and supported a much slower depreciation pace compared with pre-pandemic levels. In the outlook, the Committee is of the view that the strong reserve buffer level should provide some assurance to the market and help abate investor concerns, as the country’s external payment position remains strong,” the MPC stated.

Meanwhile, market-watcher AZA Finance projects the recently secured concessional funding of €82.5million will provide a further buffer for the cedi to slow down its depreciation.

“The European Investment Bank in Luxembourg on December 13 signed a €82.5million concessional funding package to strengthen healthcare, provide special medical equipment and medicines across Ghana. With the support grant and ongoing intervention from the Bank of Ghana’s forward FX auctions, we expect the cedi to continue its slow recovery against the greenback as we approach end of the year,” AZA Finance FX week forecast stated.

Up until May, the situation was the opposite of what is being experienced – as the dollar was rather weakening against the cedi, with the local currency recording five consecutive months appreciation against the greenback. The cedi appreciated between 0.2 and 0.5 percent against the dollar within the five-month period.

However, the tables began to turn in June when the cedi recorded no appreciation at all and started depreciating in July. It saw a 0.6 percent depreciation in the month and followed with -1.5 percent at the end of August, -1.8 percent in September and -2.4 percent in October.

BoG to offload US$450m to stabilize cedi in first quarter