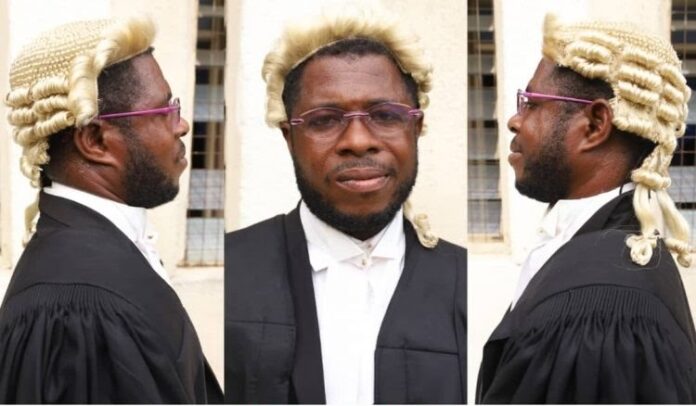 The fake lawyer who was arrested in court while personating as a lawyer in the Western Togoland Restoration Front case, Dennis Seyram Benson has been convicted and sentenced after pleading guilty to 10 charges.

The convict who had earlier pleaded not guilty, changed his plea to guilty when he appeared before the Kaneshie District Court to six counts of “deceit of court by personating contrary to section 215 of the Criminal Offences Act, 1960 (Act 29)” and four counts of “unlawful practice as a lawyer contrary to section 9((1) and (2) of the Legal Profession Act 1960 (Act.32).”

He was therefore convicted on his own plea of guilty and sentenced to a fine of 250 penalty units (GHc3,000,00).

This was after his counsel Chris Akumey pleaded for mitigation to the court to say he is a first-time offender and prayed against custodial sentence.

Though the prosecutor, Detective Chief Inspector Amoah Richard prayed for the court to impose a punishment that will be deterrent enough to others who intend to venture into such criminal trade, the court acted otherwise.

The court presided over by His Worship Isaac Oheneba Kuffour sentenced the accused to a fine of 250 penalty units (3,000.00) in default 16 months imprisonment.

The brief facts of the case as presented to the court by Detective Inspector Amoah were that Benson Dennis Seyram is a farmer whilst A2 is a lawyer.

According to him, during the month of September 2020, groups of people were arrested for various offences including treason felony, and were arraigned before various courts including Circuit courts 2 and 4 as well as the Kaneshie District court ‘2’, Accra.

According to the prosecutor, in the course of the court processes, A1 and A2 represented some of the accused persons as lawyers and although A2 who is a lawyer knew that A1 is not a lawyer, he recruited him and provided him with lawyers’ gown and wig to practice with him in his law firm as a lawyer.

However, the prosecutor said, “close observation and monitoring of A1 vis-a-vis his demeanor in court raised suspicions about his identity as a lawyer. Police began surveillance on him whenever he appeared before court.”

Detective Inspector Amoah said, on November 9, and November 18, 2020, A1 appeared before the Accra Circuit Court ‘2’ presided over by Her Honour Mrs Rosemary Baah Tosu and falsely represented some accused as a lawyer although he knew he was not a lawyer thereby personating and deceiving the court.

“On December 15, 2020, A1” the prosecutor said, “again appeared before Accra Circuit Court ‘4’ presided over by His Honour Emmanuel M. Essandoh and falsely represented some accused as a lawyer.”

The prosecutor said, the accused on December 3, 2020 fully dressed in lawyers’ apparel which was supplied to him by A2 appeared as a lawyer in a court case number B1/19/21 with case title Hope Mortey and 22 others at District Court ‘2’ Kaneshie presided over by Her Worship Ama Adomako Kwakye and falsely represented some of the accused as their counsel.

On December 17, 2020, the prosecutor said, with intent to obstruct justice and deceive the court once more, A1 dressed as a lawyer and falsely represented in same case as counsel for some of the accused.

Chief Inspector Amoah said, during proceedings, the magistrate probed to ascertain the identity of A1 as a lawyer, but answers given by A1 in the course of the probe created more doubts than clarifications.

He was therefore handed over to Police for further investigations and inquiries made at the General Legal Council of Ghana to authenticate the identity of A1 as a lawyer proved otherwise.

The prosecutor said the reply from the Legal Council indicated that the name of A1 was not found on the roll of lawyers in Ghana and therefore confirmed unequivocally that he is not a lawyer.

He said A1 stated during interrogation by Police that, he practiced as a lawyer with A2 as his senior and appeared before Ho High Court ‘1’ on November 30, 2020, where A2 introduced him accordingly as a lawyer.

“Further investigations were conducted to that effect and it was confirmed that indeed A2 on 30/11/2020 at Ho High ‘1’ did appear with Al who robed as a lawyer and introduced him accordingly to the presiding judge H/L Yaw Owoahene-Acheampong as a lawyer although he knew Al was not a lawyer.

“This act of Al encouraged and emboldened A2 to appear before various courts including Accra Circuit Courts ‘2’ and ‘4’ as well as Kaneshie District Court ‘2’.”

“After investigations, both were charged with their respective charges as stated on the charge sheet and arraigned before this honourable court,” he told the court.