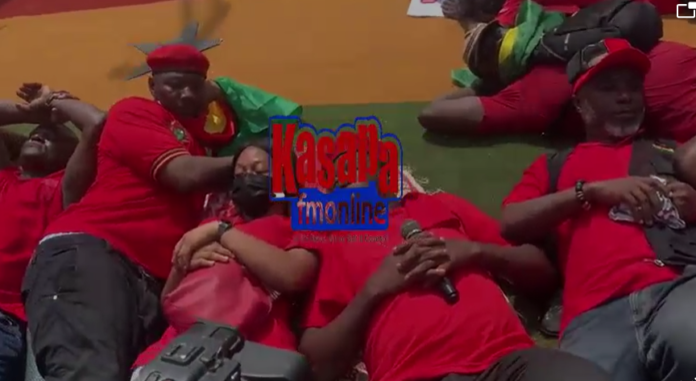 Justice for Ghana demonstrators on Wednesday, December 08, 2021, took to napping after they were denied entry into the premises of parliament.

The protesters mainly demonstrating against the 2022 Budget and the general hardship under the Akufo-Addo government started off their march from the Efua Sutherland park with the hope of presenting a petition to parliament, but protesters hit a snag with that plan.

The protesters were blocked by heavily armed police officers who were detailed at the main entrance of Parliament house.

The group had threatened to picket at the precincts of parliament until their demands are met.

Earlier Police revealed appeals to have the organizers rescind their decision not to picket at Parliament proved futile and had since secured a court order to stop them from picketing.

The Ceremonial Gate to Parliament of Ghana since 6:00 am on Wednesday has been sealed off following the “Justice for Ghana” demonstration.